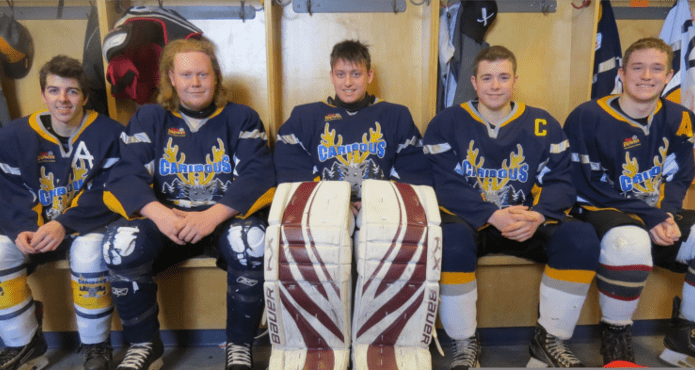 The other day I pulled into my local hockey shop to get my wheels buzzed and pick up a couple hockey shirts. I was greeted by the friendly faces of three players I’d coached this past season. One of them was picking up some new gear in preparation for summer training and upcoming junior A camps. The other, an employee, was in the back on a break, no doubt preparing for the season to come, a season in which he plans to join me on the bench to start his own coaching career.

The other sold me the shirts.

This young man is moving away from home to play junior hockey in August. He’s in his last month of grade 12, and in a couple more months he’ll be back on the ice with me before moving to a new city to begin his new life.

Everything is about to change. I couldn’t be happier for him and the challenge with which he’s faced.

Yet here he is, a part of the workforce for a couple months like a normal 17 year-old.

I’ve worked with a lot of 15, 16, and 17 year-old hockey players over the past four years. It’s rewarding to see them have success on the ice, but it’s a different kind of reward when you see them out in public, contributing to society.

Even if none of these shirts fit me.

Here’s 10 things to remember from your minor hockey journey, graduates, as you embark on the next steps.

1. Always Be The Best Teammate

Right now you might think the lessons you learned in minor hockey all relate to your future on the ice, but it simply isn’t true. Whether you’re headed off to the BCHL, the WHL, university on the other side of the country or you’re just planning on backpacking around Europe for a year, bring your sense of teamwork with you. Be supportive. be caring. Be empathetic. Be enthusiastic (no one likes hanging around an energy vampire). Be the teammate you’d want for yourself at all times.

2. Worry About What You Can Control

Life in the real world is a hairpin turn compared with life in high school. If there’s something out there in the world that you want, then go get it. Just remember that the only person you’re in control of is yourself. Kinda like taking a face-off or staring down a penalty shot. Don’t wait for help. Take the steps necessary to find your version of success.

Newsflash, you never were – everyone was lying! Kidding. Kinda. Some players heed this advice before they graduate from high school and minor hockey. Some don’t. Either way, remind yourself that being a hockey player doesn’t entitle you to preferential treatment in university, junior hockey, or, most importantly, in the workforce. Entitlement is a dangerous element whether you’re graduating from grade 12 or kindergarten, so remember: success is guaranteed to no one.

4. Focus On Your Strengths

What made you a good minor hockey player? What attributes of your personality contributed to those strengths? Were you laid back and relaxed or intense and demanding? Whatever you are, be that during the next phase. Don’t try to be someone else, because someone else is already doing that.

5. Work On Your Weaknesses. Finally.

I get it, there’s not a lot of free time in the last couple years of high school. Or at least that’s what my players would have me believe. However, no matter what you’re doing next, make time to chip away at your weaknesses on your own time. Don’t wait for a coach or a tutor to crack the whip, either. Set a schedule and take responsibility for your own self improvement.

To douse the bridge in gasoline and throw a match? Or tread lightly before heading out of town? We’ve all faced this decision – the high road or the low road? Well, as difficult as it can be sometimes, it’s usually not worth it to burn your bridges as you move on to new challenges. Hockey is a small world. You never know when minor hockey relationships of the past will come back to haunt you.

I talk to my Dad every day and I’m a 33 year-old man. It wasn’t always like that, but he’s been my biggest fan since the day I was born (much to the chagrin of my 3 sisters – sorry, girls, I’m the favourite!) I remember talking to a different dad, a frustrated dad whose 12 year-old son was in tryouts this past season. The player was struggling (according to Dad, I wasn’t there), and it reminded me that the only person who truly wishes for an individual’s success in hockey is a parent. That never changes. Stay in touch with your Dad and your Mom when you move to a new city.

8. Make Time For Your Friends

I know, all you’ve done for the past three years is hang out with your friends at the rink, at school and in basements around your hometown. Well, that’s about to change. Some of you will move away on your own, and some will be lucky enough to billet with a buddy in a new city. Don’t forget your non-hockey friends. Make time when you come back to town. Pick up the phone. Send timely (appropriate-optional) snaps.

9. Look At The Big Picture

High school is done, and whether you enjoyed it or not, it’s the last societal institution you’ll be part of that supports you day and night no matter how badly you screw up. Junior hockey teams are built to win. Universities are built to enhance their reputation. If you’re not part of the solution, you’re part of the problem. Take a step back and look at the big picture for a moment, because somewhere in that picture is you.

And this is your moment.

As hockey coaches, teachers, advisors, and friends, all we’ve truly tried to contribute to your life is an ironclad sense of right and wrong. The problem is that sometimes we struggled to balance on the thin line that divides the two just the same, but more often than not we found success because of strong, passionate, intelligent young citizens such as yourself. And yeah, maybe you should have received more powerplay time, but maybe you should have prepared better instead of going out to that party…

Never mind. The point is that you’re more or less on your own now. It’s up to you to bring your ambition to work with you every day. If you forget your habits and your ethics, you’re the one who will face the music.

But I don’t think that’s going to happen.

You’re going to be faced with a million tiny choices in the next few years, very few of which will be easy to classify as blatantly right or wrong, unfortunately. But as a wise man recently told me as I faced a difficult decision of my own, the ability to choose is the true nature of empowerment.

And keep your feet moving.