What a Ride – 20 Years in Minor Hockey 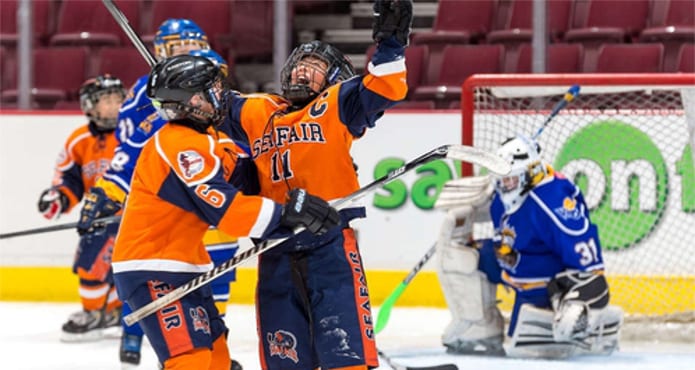 Shackles has been described as the “heart and soul” of the Richmond hockey. A long time minor hockey executive and visionary who is passionate about promoting the core values of sport. He continually challenges himself and others around him to make the game better. To Shackles, winning and losing isn’t nearly isn’t nearly as important as ensuring players are afforded an environment that first and foremost emphasizes the love of the game.

View all posts
0
(0)
In terms of minor hockey twenty years is a long time. An uncomfortably long time. And I say uncomfortable because at the beginning of the past twenty year period I was a young parent, with young kids and I had absolutely no idea how any of the hockey gear was supposed to be worn except the skates and helmet. That I nailed with confidence right away. At the end of this twenty year period I am no longer that young parent, no longer have young kids and probably know far more about minor hockey than I ever should know. My kids are now adults and have their own lives and they don’t need me to tie their skates or dress them for practice and my chauffeur’s hat has long since been retired.
And you might think this is another one of my articles where I write about enjoying the minor hockey ride while it lasts or seeking pleasure from the little things as your kids grow and skate up and down the ice throughout the H1/4 years and then into Atom and beyond. But it isn’t about that. It’s really about you…and me.
Something that I realize when the wheels stop turning on this minor hockey bus and life reverts back to what it was before hockey, cold rinks and malfunctioning scoreboards and really, before kids, is that the person that I was, while certainly moulded and changed by my minor hockey experiences, is still here somehow…..minus the hair. Only now I have the opportunity, and time, to look back at my life as a parent just entering the minor hockey world in 1997 and compare it to who I was in Atom, through the older divisions to now, someone ready to take his last ride to the rink as a hockey dad. Which is to say that the giant signpost that I am now encountering in my life, the large exit sign to the off ramp from kids hockey, lends itself to a time of self examination.
And it does so because who you are is constantly shifting and every time it does you have a new layer of who you were to contemplate.
While I wasn’t looking twenty years slid by me. It slid by as I was preoccupied with the minutiae of what passes for important things during these years. Getting to the rink on time (another train at Shell Rd.!?), what Flight we’re in, win-loss records, who’s coaching, etc…the usual bric-a-brac that we all have to adhere to whether we take an active interest or not in our kids activities. Couple that with all the extraneous volunteer work in Seafair and the soccer and baseball coaching and the years tend to slip by quietly, furtively and quickly.
Then one day, after one loss in one game in your last season, you realize that while many younger people you volunteer with are still a part of that super highway of kids sports, you’re parked off to the side now and no longer an active participant. And you look at yourself and try to remember what it was like coming to the rink that first day or travelling to the first ‘road’ game or seeing the first goal or paying for that first incredibly expensive stick (and stammering incoherently in trying to justify the expense). You try to remember attending your first tryout or ‘big game’. You conjure up the emotions from the first Rep cut and compare it with how you would respond today. You see the recent years as a long slide into adulthood for your kids and a long slide into irrelevance for you as a parent.
And you try to remember who you were, before the world of raising kids scooped you up and deposited you, years later, in a destination that was unimaginable. As newlyweds, it used to be that it was hard to imagine what it would be like to have kids. Then, as young parents, hard to imagine your toddler in Grade five or what it would be like having a teenaged son graduating from high school or going off to university. So many things seemed unimaginable even as we were hurtling towards each step of the parental ladder as our kids grew and their experiences infused our lives with new environments. Now? Now I can’t remember what it was like building that crib, walking them to school or what day to day was like fitting in hockey practices among the soccer or baseball times. I can’t remember much of what it looked and sounded like, what the texture of everyday felt like as we navigated our way as a family through the school and minor sport years.

I now can’t remember much what I used to be unable to imagine.

This twenty year ride along the road of minor hockey has preoccupied me. I arrive at the end of it a little worn out and sporting a little less hair, yet grateful for the growth it has provided me. It’s been a distraction to the years that have snuck by, unnoticed by my busyness in attending meetings and watching games. The ride has come to an end for me and has placed me in a different space to the one I left all those years ago and I’m not quite sure if I too am different to who I was twenty years ago or not. Riding along on the minor hockey train tends to do that to you. Growth comes from adversity and knowledge comes from experience and you can pack a lot into two decades of your life. Especially two decades spent in the crucible of the world of sports and the kids who play them.
Am I a different person now? Has twenty years changed me? Maybe. Twenty years spent in or out of the rink is just part of life. And for you, when you get to the end of that line how will you view yourself and the years you have spent shuttling from one game to another and from one practice to another? Are you the same person you were before you were giving the job of raising kids without so much as an instruction manual and a vague sense of what to do? When the ride stops and you disembark will the surroundings be familiar or will you be in a completely new space and find yourself different, older, wiser, to who you were before? Have you given much thought to what life will be like when your kids are no longer under your roof and your sense of who you are inevitably changes?
For me, as I find the last bank of the rollercoaster now behind me, the flash photo taken and the bar in front of me about to be raised to let me out, I have a lot to think about what the last twenty years of my life as a parent and as a hockey parent has meant. So many questions and scant few answers.
Although through it all I can say with confidence I have learned one thing. I do, thank goodness, now possess the knowledge of how hockey equipment goes on. So there is that.
Nigel Shackles President,
Seafair MHA