View all posts
What each drill has in common is the theme of keeping the pass short, but also really focusing on moving your legs.
5
(1)

In the last article I wrote, I focused on the progressive breakout and how you can use multiple drills, even station-based drills, to teach the breakout through possession. Yet, once you’re out of the zone, the question is usually centered around the rush. But before you get too ahead of yourself, let’s not forget about the neutral zone.

Too often we think the neutral zone is just something you skate through on your way to the offensive zone, but a lot can happen here. The worst thing that happens is a turnover. All the work to execute a nice breakout, and then a turnover sends you right back in.

Much like the breakout, the neutral zone can be taught through progression, but more importantly, it can be taught using some of the same ideas they learned in the breakout, making the whole process much easier to understand. This is especially important for the younger age groups.

What each drill has in common is the theme of keeping the pass short, but also really focusing on moving your legs . . . 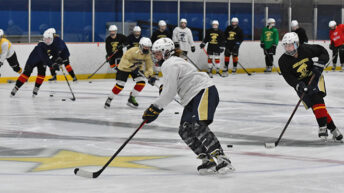