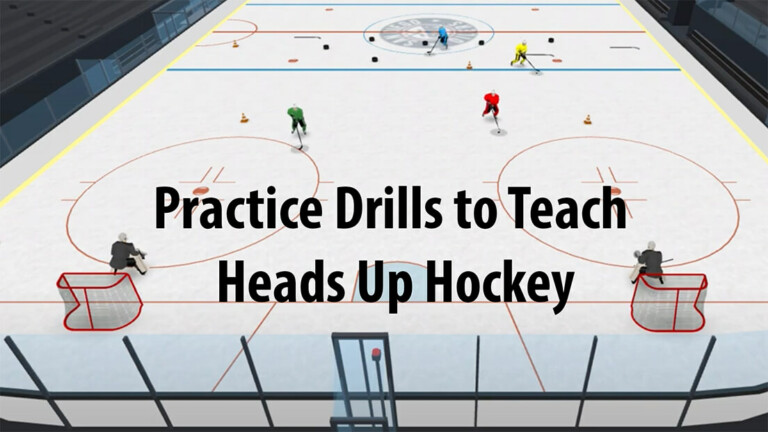 Heads up! This story provides practice drills to help your players keep their heads up on the ice.
5
(2)

An almost never ending battle in youth hockey is getting players to remember the game exists more than three feet around them. There’s a tendency to look down, or think about what they can do with the puck, which eliminates their teammates, who are wondering why passes aren’t being made to them. It also invites turnovers as your opponent catches them in their own bubble, unaware of the game happening around them.

While listening to a recent episode of The Glass and Out Podcast with guest Tobias Johansson, the head coach of Norway’s men’s national team, I got an idea. He spoke about a drill idea in which you put every player in the same color jersey, so they have to be aware who their teammates are and more importantly, where they are, not by the color of their jersey, but by picking their head up and looking.

This reminded me of a drill I have used in the past, that went beyond just jersey color. Instead, while everyone is in the same jersey, we add another element: a helmet sticker.

On a team in practice, you tend to know your teammates well, and if I throw three or four kids on a single team against another team in the same jersey, they won’t struggle for long to remember who is on their team and make those passes to each other.

In this drill, as you can see below, you put all the kids in the same color, and then use color stickers we found at a local office supply store to assign three teams, blue, green, and red. This makes it harder for kids to familiarize themselves with their teammates because there are now six kids on the ice all in the same color.

The drill usually runs a mess the first few times. But don’t give up on it, over time you will notice the start making an effort to better identify who they are passing to, and ensure it’s the right player and a good pass. Eventually, you will notice a lot more heads up hockey.

Heads up! This story provides practice drills to help your players keep their heads up on the ice . . .