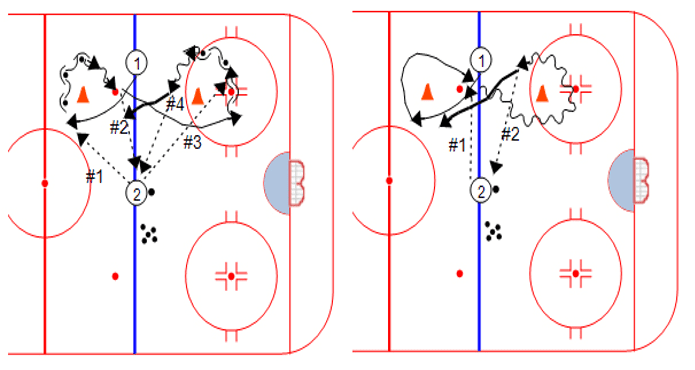 Passing is one of the most important fundamental skills for players of all levels. The ability to pass and receive the puck is the difference between a good player and an elite player. In terms of team play a team that is efficient in passing will be able to get the puck out of their end, attack the opponents and have a great power play.

A couple of key points in passing receiving; 1) Head/eyes up (eye contact), 2) Stick blade on the ice, 3) blade square to the oncoming puck and 4) “cushion” puck when receiving (soft hands). Passing: 1) Eyes/head up. With young player we like to emphasize the sweep pass where we use the following: puck behind the back foot / Look / sweep / point (roll wrist pointing blade at the target.

Here are 3 simple drills coaches can do with their teams or players can do at extra ice sessions.

AGILITY PASSING – Player 1 leaves for the pylon on his right, upon passing the pylon he pivots backwards, as he is going backwards he receives a pass from player 2 (#1), takes the puck backward, clears the pylon, pivots forward and passes back to player 2 (#2), player 1 then repeats the sequence on the other side (passes #3 & #4). Have players pass & receive on their forehands & backhands. You can have players make 10 passes or go by time. Insist on proper passing technique & quick feet.

TIGHT TURN PASSING – Player 1 leaves without the puck does a tight turn around the cone. On the way back he gets a pass from player 2 (#1), he carries the puck doing a tight turn on the other side, then passes the puck to player 2 (#2). After some time or number of reps, player 1 repeats the other way. The other option is to have player 1 and 2 exchange touch passes when player 1 is in the middle. Players change position.

LATERAL QUICK FEET PASSING – Player 1 is facing player 2, leaves to his right moving laterally with quick feet. When he clears the pylon he stops then exchanges a touch pass with player 2 (#1 & #2), he then moves laterally with quick feet to the other side of  the pylon and exchanges touch passes (#3 & #4). Again, we can do this by reps or by time. Players switch positions.

Enio Sacilotto is a career hockey coach of 31 years. Twenty years at the Elite men’s level in Europe with coaching stops in Italy, England, Norway, Denmark, Switzerland and Croatia. Enio was the Assistant Coach with the 2013-14 Team Pacific U-17’s who won a Silver medal at the World U-17 Challenge.

Come join Coach Enio Sacilotto, Assistant Coach, Victoria Royals, President, International Hockey Camps this summer for his Defensemen Camp in Victoria, BC, Nanaimo, BC, North Delta, BC and Burnaby Winter Club. Go to COACH ENIO’S INTERNATIONAL HOCKEY CAMP SCHEDULE for details of the Defensemen Camp and all other camps.

The winningest coach in USHL history has established himself as a legend in junior hockey.