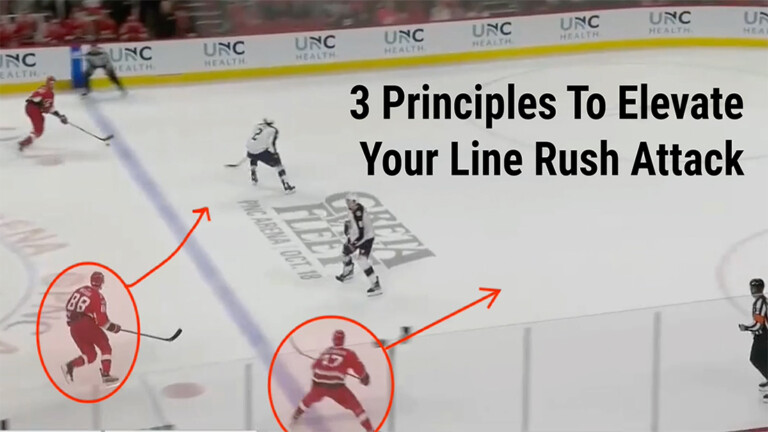 These principles can be incorporated in any hockey practice plan through drills & small area games.
5
(3)

Hockey is played in four primary phases: offence, defence, transition to offence & transition to defence. Due to the nature of the game and the high volume of possession changes & transitions, teams find themselves with lots of opportunity to create offence through line rush attacks. This includes odd man rushes, but just as frequent are situations where numbers are even for both teams as well as a numerical disadvantage for the offensive team, such as 1v2’s and 2v3’s. Combine that with evolving defensive strategies & teams emphasizing strong backchecking tactics, and it has become increasingly hard to generate quality offence off of the rush.

Below we will take a look at three principles to help swing the competitive advantage back to the offence & increase your team’s ability to generate quality scoring chances off of the rush. These principles can be incorporated in any practice plan through drills & small area games. We will examine the how and the why behind each principle, and provide video examples of their execution. Although simple in theory, these areas of focus are often overlooked when it comes to generating offence through line rush attack.

These principles can be incorporated in any hockey practice plan through drills & small area games . . .