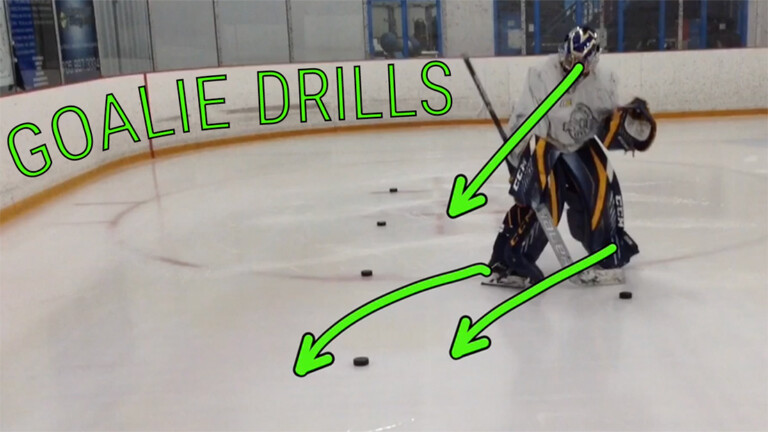 “If a shot takes less than a second to stop, even with 40 shots against in a game, that’s less than a minute making saves.”

All head coaches need a plan for goalie development and we are going to help empower you to run training sessions confidently. This series of drills focuses on a unique setup called the “Zipper.” These drills I took from Steve Androlewicz of Racine Goalie Academy in St. Louis, MO. I love these drills as they can be done in a team or camp/clinic setting. Each movement in the pattern mimics movement a goalie would use in the crease to adjust their angle/squareness/depth. Success in goaltending and making the save is directly connected to their stance, balance, edge work and efficiency of movement.

We start with basic movements: shuffles and t-pushes. Start with forward movement, diagonal from puck to puck. This creates the zipper pattern as we move through the drill. We want the goalie to visualize moving from the post to the opposite dot angle. You want to make sure that the goalie initiates all movements with their eyes, then rotate (identifying the new “shot angle”), squaring their torso and then adjusting their feet so they are moving directly to the next puck. The focus is for the lead or glide leg to arrive just outside of the puck, allowing the goalie to square up on the puck. The back leg or push foot needs to SNAP or quickly recover back under the body by mid movement. Many young goalies tend to “drag” their push foot, elongating the movement, putting them off balance and then setting in a low/wide stance when stopped.