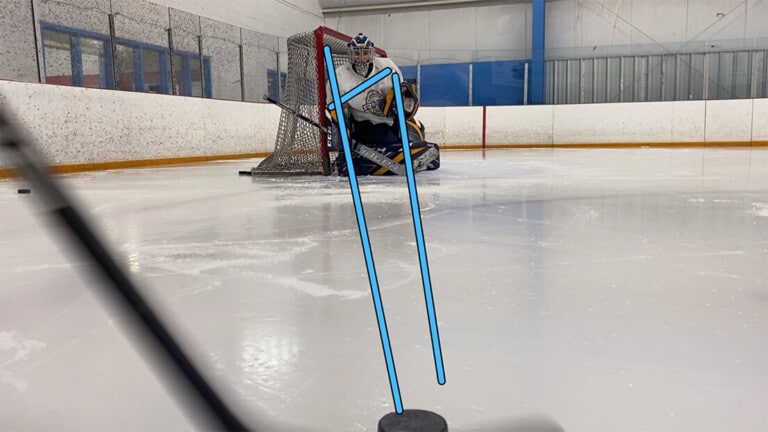 This technique was developed to help defend against dead angle plays, while sealing off the short side of the ice and allowing the goalie to anchor themselves to the post.
3.5
(2)

The Reverse Vertical Horizontal (RVH) developed in the early 2010’s in northern Sweden. It was first introduced in its current form by Linda Blomqvist, goalie coach at Lulea in the SHL. Blomqvist is tasked with the development of the U18 and U20 goalies on the men’s side. Lulea has a very rich tradition of goalie development and has recently produced Jesper Wallstedt, 1st round draft pick of the Minnesota Wild in 2021. The RVH was developed to help defend against dead angle plays, while sealing off the short side of the ice and allowing the goalie to anchor themselves to the post.

Leading up to the 90s, goalies would stand straight up on their post to cover the dead angles, aka the space starting at the bottom of the circles to the goal line in the defensive zone. This positioning provided full coverage short side, but limited the goalie’s ability to control the shot, place the rebound and limited mobility on any passes back door. This position was great until the game started moving more east/west. Teams, especially on zone entries, developed plays that would see forwards driving wide on a 2-on-1 and looking for the second forward driving down low to the “back door” creating a cross crease pass.

When Francois Allaire started working in Anaheim he and J.S. Giguere developed what is the Vertical Horizontal (VH). The VH was to help goalies defend against a dead angle attack BUT be in a half butterfly. Vertical meaning the post leg is upright against the post sealing the short side and Horizontal as the back leg is lying on the ice in a half butterfly. The vertical leg allows the goalie to position their anchor foot (skate against the post) so that they could push directly across the net in the full butterfly and have a chance on a back door pass. This save selection was revolutionary and soon most goalies we using it globally.

The RVH came in the early 2010s from Sweden as they found that on jam plays to the short side the goalie had a hard time holding their post in a scramble and had a difficult time smothering loose pucks in their feet/5 hole. The RVH is technically the opposite (positionally) to the VH, where the short side leg is in a half butterfly and the back side leg is anchored almost vertically allowing the goalie to drive their body into the short side post. This position offers the best of the 90s vertical position with maximal short side coverage, while also being able to articulate your body position on the post with the back side leg/skate acting like a rudder. Goalies would also learn how to push off the post with their skate on a cross crease pass, simultaneously releasing the back side leg into a butterfly position.

We have a below the goal line situation featuring Martin Jones of the Seattle Kraken. I chose this clip as it shows the versatility of the RVH position. If you watch closely you’ll see Jones’ RVH on his right and left post, how he transitions post to post following the play. We can also see how Jones articulates with his back or inside foot on the post based on the pucks position.

This technique was developed to help defend against dead angle plays, while sealing off the short side of the ice and allowing the goalie to anchor themselves to the post . . .