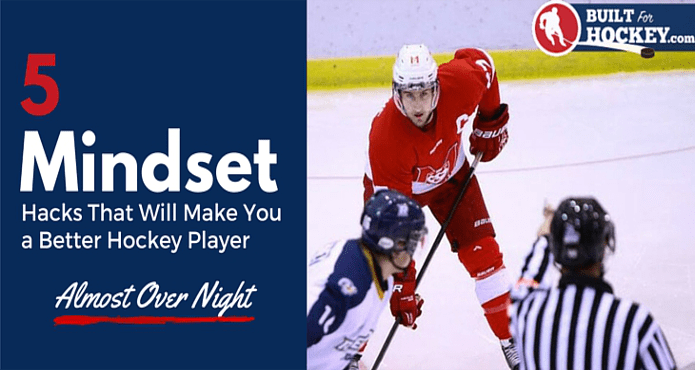 Hockey is a game that takes a ton of practice, skill and patience to master.

It can take years before you’re considered a good hockey player—let alone great.

And the sad part about it all is there aren’t any shortcuts—you have to put in hours of work both in the gym and out on the ice for true improvement.

But what if I told you there actually was a shortcut, and that it had nothing to do withlifting weights or firing a bucket-load of pucks, one after another for countless hours?There’s an old adage that says humans only use 10% of their brain power.

While that statement is very much false (every part of the brain has a known function—sorry to burst your bubble!), I like to use it as an example when illustrating how most hockey players spend their time when trying improve their game…

You see, the typical hockey player spends time working on his game much like the example below:

According to Richard Koestner, a psychologist at McGill University, “Sport psychologists argue that at the elite levels, mental skills are responsible for between 50% and 90% of the variance in performance during important events or competitions.“

I lied…there are shortcuts for improving your game.

Training your mental game can have a significant impact on your development as a player, and these 7 mental hacks are as close to a shortcut as you’re going to get.

They’re super easy to implement and will literally make you better over night. Before the game, you might be going through a ton of things in your mind—your opponent’s play style, your team’s system, what you worked on in practice, something your coach mentioned, or even how many points you’re going to get.

That’s all fine and dandy to think of before the puck drops, but as soon as the referee lets that black think go—just let go.

Whatever happened prior to puck drop doesn’t matter anymore. You have to learn to block everything out and keep your mind calm.

Forget about over-thinking things and just trust your preparation. You can’t get ‘in the zone‘ so to speak with a clouded mind.

‘In the zone‘ is where good things happen.

Besides, if you’re not ready, it’s already too late.

Switch your mindset to one that embraces mistakes rather than fears them. This isn’t even about positivity or anything like that…

This is about NOT fearing mistakes so that you can be yourself out on the ice. So many players shy away from trying things because they’re scared to make a mistake, scared what their coach will say about them, or what teammates will say behind their backs.

Forget about fear. Forget about making mistakes. In fact, delete these words from your vocabulary.

You have more to gain from being yourself and trying things out on the ice than you have to lose by playing fearfully.

Just think about it—if there were no mistakes in hockey, every game would finish 0-0.

How’s that for mistake-free entertainment?

Get over the fear of making mistakes—it’s probably the biggest inhibitor of success in a hockey player’s career.

(Update: A quick note for the players so coaches refrain from pulling their hair out—there’s a difference between making mistakes and always making high-risk plays. Make sure you know the difference!)

Routines & rituals are important tools you can use to maximize your level of performance out on the ice, but you must first learn the difference between the two. While it sounds clear that it’s better to have routines than rituals, I still believe rituals to be useful. Let’s look at how you can use both to your advantage:

Come up with a pre-game routine that allows you to feel fully prepared. This means you should incorporate things that help you become completely prepared physically, technically, tactically & mentally. It doesn’t have to be in this specific order, but you’ll want to check each one off your list before the puck drops.

Here’s what my pre-game routine looked like on any given night:

A simple routine, but it was all I needed to feel fully prepared and in control of my upcoming game. There were no question marks and no doubts once I had completed this routine, and you should look to come up with your own routine that makes you feel the same way.

To top it all off, I also had a pre-game ritual that didn’t help prepare me like my routine did, but allowed me to feel more comfortable.

For me, it was tying my skates at the exact same time before every game. For others, it was being the last off the ice after warm up, or even dumping water down their backs before their first shift.

The key here is this; your routines prepare you while your rituals make you feelcomfortable.

And to note, your rituals are just an added bonus. They shouldn’t make or break your performance.

Don’t go all “superstitious” on me now.

Let your routine dictate your preparedness, and use rituals to help you feel comfortable—nothing more. When the two work together, you’ll feel comfortable & fully prepared to perform.

Build your own routine & ritual combo and maximize performance. A negative attitude is detrimental to your performance. You may not realize it, but just one single negative word can start a chain reaction that can lead right to a scoring slumpor a streak of bad performances.

The same outcome (you missed), just a different way of framing it.

Re-frame negativity into something positive, like the second statement in the example above.

This can be used in many situations—when you miss a scoring chance, when you make a mistake, when you get injured, and more. Whenever you face adversity, think positiverather than negative.

BelievePerform, a sports psychology website, stated in an article written by Phil Naughton that having negative thoughts in sports like hockey can lead to:

As hockey players, the 5 effects mentioned above are what I like to call performance killers, and they can make or break your success as a hockey player.

This can be avoided by simply re-framing negativity into positive thoughts so that you’re always pushing forward rather than dwelling on negative outcomes of the past.

Negative thoughts can spiral out of control and can completely destroy a hockey player’s confidence, affecting an entire season of hockey.

Don’t let this be you.

5. See yourself doing it right

By far the most powerful on this list—see yourself doing things right before actually doing them. The fancy word for it is ‘visualization‘ or ‘imagery‘, but all it’s really about is seeing yourself doing it right.

Dr. David Hamilton is an expert on the interactions of the mind and the body, and he believes that visualization is one surefire way to make things a reality.

“Your brain cannot tell the difference between something that’s real and whether you are just imagining it.”

By imagining yourself going through different scenarios before they happen, you’re training your mind to help you make the right play when the time comes in reality.

In fact, your mind can’t tell the difference, so it’s like you’re actually practicing!

This is extremely powerful, and when applied to sports, it can help you improve your performance significantly.

Olympians have been using this method for years in order to gain a leg up on competition.

You may find it funny or even weird, but even the pros in the NHL are doing it:

Before your next hockey game, take a few minutes to yourself (during the part of your routine where you prepare mentally) and go over different scenarios in your mind.

The more you do this and the more you explore different situations & scenarios in your mind, the more powerful this technique can be for you.

Most importantly, see yourself winning or achieving a specific task in your mind first, and you’ll be much more likely to bring it to life when the time comes to do so.

So there you have it—5 mental hacks to help you become a better hockey player, literally over night!

Trust your preparation and just let go of everything else that doesn’t matter in the present moment. Don’t fear mistakes, but embrace them.

Use pre-game routines & rituals to feel completely prepared & comfortable in order to deliver the performance of a lifetime.

Re-frame negativity into positive comments or thoughts, and you’ll stop yourself from entering a downward spiral of low confidence. Also pay attention to your body language, and keep that positive too.

Last but not least, see yourself doing the right thing before you go out and do it, because your mind can’t tell the difference between what’s real and what you see in your mind!

“Whatever the mind can conceive and believe, it can achieve.” – Napoleon Hill

“This post was originally published on Builtforhockey.com by Ben Levesque”