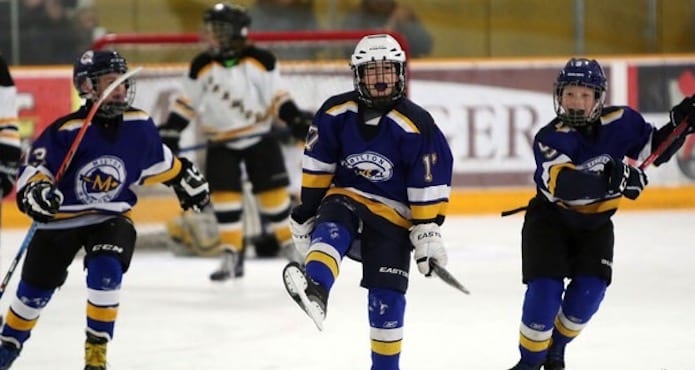 I thought it would be a good idea to start the conversation by taking a deep, honest look at what hockey has become at the youth levels. Not every player will fit into each box perfectly, but wiggle room is ok.

Alright, here we go. What does today’s youth hockey player strive for above all else?

Kids don’t just play anymore. They have to travel and seek out the best. The neighbourhood kid is just too big of a plug to play against and is a waste of time.

My advice: Just play and play a lot. Play against bigger, faster, younger, older, slower, more skilled, less experienced, girls, boys, and so on. The game is the greatest teacher and coach of all-time. Every game at every level despite winning or losing or the scoreboard has lessons to be learned. Skills to be practiced. Situations to be experienced and played out. Roles to be perfected. Systems and concepts to be applied. Fun to be had! Imagine that?

Myth #2: It’s important and normal to rush to the next level

Parents are convinced their player needs to play AAA by age 12 or their hockey career is over. And most clubs/organizations have no problem reinforcing that unicorn myth.​

My advice: Just stop. Please. Hockey people should take ego and self interests out of the discussion and just educate players and families. My experience is there is value in AAA at the 14U Bantam Major level of hockey and above. It is not where you start the race but where you finish. Instead of driving and flying all over to play a handful of games, get on the ice, in the gym, on the sport court, on the track, on the turf, in the driveway, at the park, and find the value and much lower cost of those things.

My advice: Every rink should build a program for 6U, 8U, 10U and 12U or whatever levels they can based on player base/population. This is where future stars are made.

This is where coaches make a lot of mistakes and learn before advancing. This is where young kids, that want to make some money refereeing need to learn and gain experience. I just returned from a trip to Minnesota. There was more than one association that told me they have to put three teams on the ice for a practice due to a shortage of indoor ice.

As a kid that grew up on outdoor ice, I naively asked about moving teams outdoors and after they laughed at me they said nobody would accept that. I understand the dangerous bitter cold from living there and taking California teams there in the subhuman winter months, but when kids can get more practice time/playtime/fun time outdoors over the course of three days than they get in a month at home, maybe there is value in getting uncomfortable and stepping outside the box.

Myth #4: Parity must be accomplished at all costs

Time and money have zero consideration. In California we have seven levels of U12 PeeWee hockey. Did you get that? Seven levels.

Winning 6-0 is a waste of time. Losing 6-0 is a waste of time.  So we will drive hours more or fly​ and spend hundreds or thousands more to make sure we have two-goal or less differentials. Apparently learning and development can only happen and is 100% dependant​ on close scoreboard numbers. Or maybe we are just tying to protect the sensitivities of young kids. I don’t know anymore.​ Losing is okay but getting spanked is a punishment worse than death? Hmm​. At least we don’t have participation trophies in hockey.

My Advice:  See # 1 above and just play. Stop stressing and worrying about levels, letters, and expensive perfect parity.

Myth #5: The only place to learn is on the ice

Kids don’t want to play unless it’s at the indoor rink. Here in California, that can mean an hour drive, plus 15 minutes to get dressed, plus the hour ice session, plus 15 minutes to get undressed, plus an hour drive home. That’s a 3.5-hour commitment for an hour on the ice plus the cost of gas plus $30, $40, $50 or more for the ice session where the player most likely took 20 shots and had the puck on their stick for five minute​s total. Getting youth players to do anything outside of going to the rink is like getting them to clean their rooms.

My Advice: A large percentage of pro athletes were also multi-sport athletes. 28 of 32 NFL first-round draft picks in 2018 were high school multi-sport athletes. Push, cajole, encourage, bribe, force, educate, incentivize, and exhort players and families to play other sports. Show them the data on overuse injuries. Show them the data on pro athletes and the huge value of playing multiple sports.

I test players in the spring on speed, strength, agility, and skills like shooting and stickhandling. I then show them ways without ever going to the rink they can make drastic improvements over the off-season and even in-season. Once players reach a certain age and level of proficiency, they are made in the off-season and most of the time that includes very little rink time.