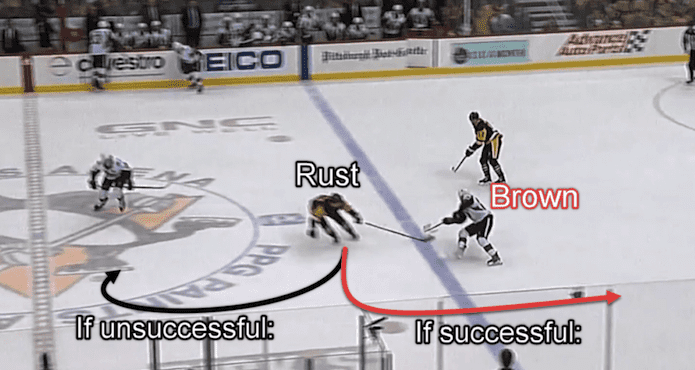 This is a piece of the game that is the most utilized after skating, but rarely taught. It controls how the game is played and on what terms, like a general picking a battlefield. Being able to consistently do this well is a massive advantage and something that is often overlooked.

When people talk about skill they never say “this player takes great angles,” yet players that take great angles control the entire game. Those are the players that dictate the terms of play. It’s incredibly important for something that may seem unimportant to most.

Controlling the game without the puck starts by dictating the spaces and options available to the other team. This shapes the game in which all player must play. It’s subtle, but the smart players are always controlling the angles and what is available to opponents.. The elite players understand which areas of the ice are important and take those away.

On the forecheck, angling forces opponents to skate where you want them to go. The player first in on the forecheck (F1) in particular has a critical job to angle the puck carrier to one side of the ice where the rest of the team can then steal the puck away. Not only is the first player forechecking important, the other players are even more important. They are responsible for tracking their assignments and angling them into bad spots so if they do get the puck, it’s in a compromising position.

This is the way that players with limited physicality are able to be very difficult to play against — they are always controlling the space available to the opponent and dictate what is available to them.

Teaching proper angling at and away from the puck gives players a tool to become proactive rather than just waiting around for something to happen then reacting. This is empowering to players and as a team. As players get better and better at angling, the group then starts to hunt the puck and suffocates all the passing options and lanes. Players become active in forcing the opposition to bad ice.

This proactive mentality allows the defence to dictate the offence without ever having to touch the puck. What coach doesn’t want players to set gaps before the opponents get the puck? Angling is the most important tool in doing so. A great example would be when defenders are playing defence by skating forward, not backwards. They are cutting off the offence before it even gets going.

Clip of the day – Aggressive D @ the O-blueline

Watch the D skate forward, use their angling skill, & going in stick on puck to break up plays

There are reads to make sure this aggressive D is a smart choice pic.twitter.com/AjhdkjlMe1

Concussions, shoulder injuries, and other areas that arise from the physical nature of hockey can often be mitigated with quality, safe body contact. A big part of that is how a hit is delivered.