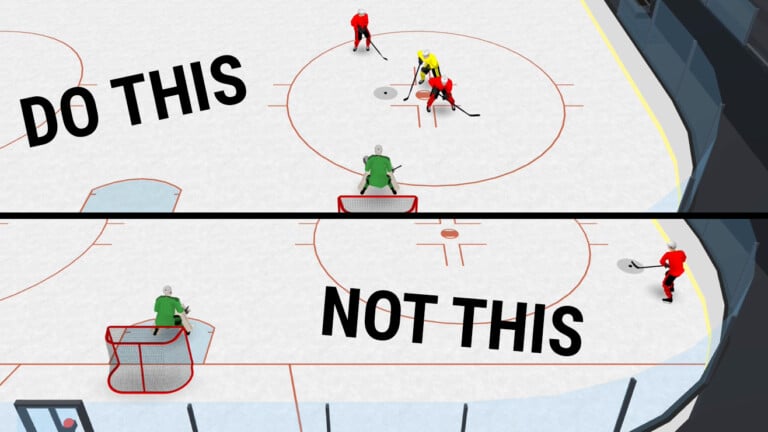 Long lines and few repetitions are the enemy of a good hockey practice. Coach Dan Arel reworks some drills to include more players and shorter to no lines.
4.7
(3)

I have the privilege of seeing a lot of practices throughout a season. At my own home rink, but when traveling around the state for our league, tournaments, and sometimes even out of state.

I love to stop and watch, because done right, there is always something to learn. Done wrong, there can be even more to learn. And in my opinion, I see a lot of practices done wrong.

And I don’t mean I don’t see a kid learning, or being taught something wrong. What I mean is, I see a lot of kids standing around waiting their turn. I see what a practice looked like when I was playing high school hockey in the mid-90s.

Long lines, few repetitions. And if we’ve learned anything over the last few decades now, repetition matters and learning by doing over and over again creates better hockey players, but also makes for better practices.

I also see a lot of skating without purpose. Lining up on the goal line and then going back and forth, but nothing pushing them to go harder, and nothing forcing them to work on any skill other than just a forward stride.

In many of my articles here, you will see I do mainly station based practices. At the youth level this is a necessity. You have 15 or more kids on the ice, and in my case, 15 kids on half ice, and you need to ensure they are moving and getting repetitions, and just the right amount of rest before they go again.

Stations help make the groups smaller. With 15 skaters, we do three stations so that we have five kids in each group. Then we tailor our drills to incorporate between three and five of them at a time.

Here are some examples of drills I see that tend to have a longer line, and then how I would repurpose them to include more players and shorter, to no lines. And then also, how to make skating drills more fun, purpose driven, and with various skills being used.

Long lines and few repetitions are the enemy of a good hockey practice. Coach Dan Arel reworks some drills to include more players and shorter to no lines . . .