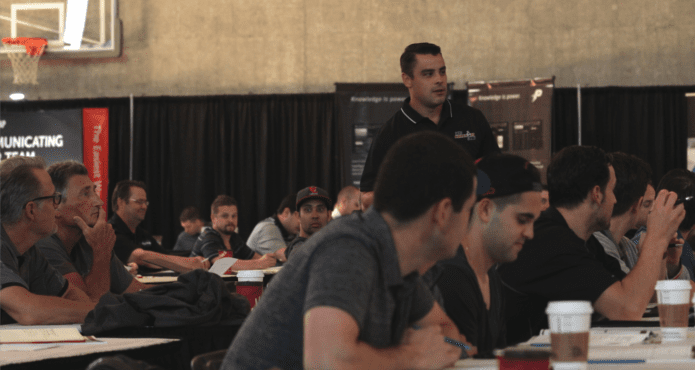 Ask any NHL coach what is the hardest skill or attribute to find and they’ll tell you it’s goal scoring.

Fifty goals in a season used be a benchmark for goal scorers. Now-a-days fifty goals is reserved for the super elite and one thirty goal season will turn an average player into a multimillionaire.

As the game has gotten faster, the time available to make plays has been reduced; in particular, around the net where goals are usually scored.

For example, go back and take a look at the Oilers of the 1980’s. With all due respect to their roster full of future Hall of Famers, there is no way they would put up the same offensive statistics in today’s NHL. In the 1983-84 season the Oilers put up an astonishing 446 goals. By comparison, last year the Dallas Stars led the NHL with 267 goals.

Brennan Sonne is an Assistant Coach with the Everett Silvertips of the WHL.  Earlier in the spring he called us and said he had a presentation he thought would be a great fit for our annual TeamSnap Hockey Coaches Conference. According to Brennan, he had discovered where goals come from.

You heard that correctly.

We asked Brennan to elaborate and all he said was, “Trust me. Your audience will want to see this!”

Luckily for our audience and us, we did trust Brennan and invited him to speak at our 6th annual conference in Vancouver. It was well worth it and as it turned out, he did in fact discover where goals come from.

Brennan and the Everett Silvertips coaching staff analyzed 503 goals from the 2014 NHL playoffs and 228 goals from the Silvertips 2015/2016 season. What they discovered was that shot selection and shot location made a big difference in terms of a puck crossing the goal line.

Here’s an exercise. Rank the following shots in terms of which produce more goals.

And keep in mind that it took over three weeks for the Everett Silvertips coaching staff to analyze all the video required to come up with this data. Their goal was to ensure they were teaching their players the right skills and habits to score goals in the NHL. According to Brennan, the result is that it has altered the way they run practice and how they work with their players 1 on 1.

We’re confident the data will give you lot’s to ponder as well.