Unless you’ve been extremely fortunate so far in your hockey career, you’ve been part of a team that was bad. Real bad. Basement bad. Laughingstock bad. Just. Plain. Bad.

Eric Lang has. When he was named head coach of the AIC Yellow Jackets in 2016, the team was coming off a dreadful 7-29-3 showing the season prior. Lang didn’t inherit the best situation, but he made the best of it. The following year American International College won one more game, then jumped to 15 wins, before hitting 23 wins the following two seasons.

“We were near the bottom of the country in just about every aspect of anything that’s meaningful,” said Lang, during his 25-minute College Hockey Inc. Virtual Coaching Clinic presentation. “Now we’ve seen significant improvements here. We’re four-time conference champions.”

But how? How exactly does a team go from the doghouse to the penthouse?

Coach Eric Lang didn’t inherit the best situation, but he made the best of it . . .

Eric Lang was named head coach of the AIC Yellow Jackets in 2016. As the ninth coach in program history, Lang is on his third stint with the team after being a four-year member of the hockey team while earning a psychology degree in 1998 and returning to serve as Graduate Assistant from 2006-08 earning his master’s degree in Organizational Behavior. Lang has led AIC to a first place conference finish in each of the past three seasons. 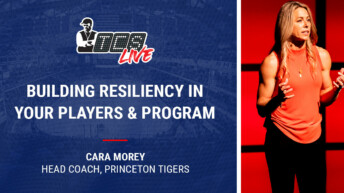