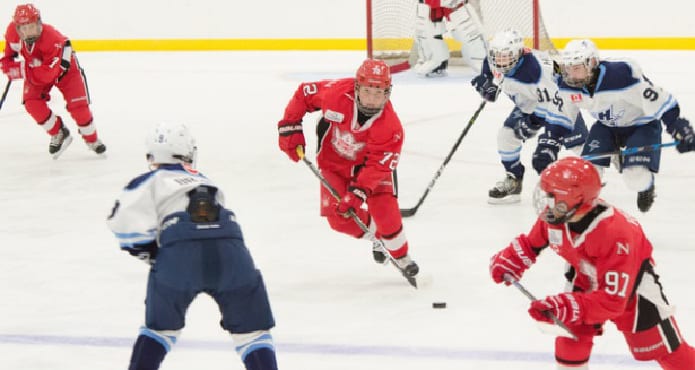 1.Behind the net flush out

When the opposing team stops behind the net with the puck in the defensive zone, both D must post up on the sides of the net with the centerman at the top of the crease protecting the house. The weak-side defenseman should always automatically flush the forward out onto their backhand for their partner to confront. The centerman in front of the net must quickly read the handedness of the opposing forward behind the net and cheat over to the soon to be strong side as soon as the play sets up. This puts the centerman in a better position to pounce once the defenseman separates the player from the puck. On a side note, it is vital for the centerman to keep their head on a swivel and get under sticks if there is pressure in front or call for the weak side winger to collapse and help out in front.

2.Offensive forward carrying the puck up the half wall 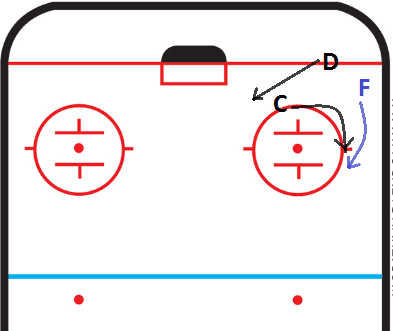 When a centerman is in a soft support position when the defenseman battles the opposing forward for possession in the corner, it’s important not to become puck focused. Staring at the battle blankly not only leads to drifting toward the corner like a boat with no anchor, it almost always leads to losing the inside position on the forward after they finally spring the puck loose and decide to accelerate into the high scoring lane. A centerman can’t forget here that their job is twofold: remain on the D side of the puck (between the puck and the net) during the battle and second, to pounce hard on the forward if they move toward the hash marks with the puck. The defenseman has to now drop into active soft support as the centerman pursues the puck carrier up the wall. A centerman has to be active in soft support, with weight on their toes, ready to accelerate. Anticipating loss of possession is key to keeping pucks out of the net from high lane drives.

3.Strong side point moving puck back down the half wall 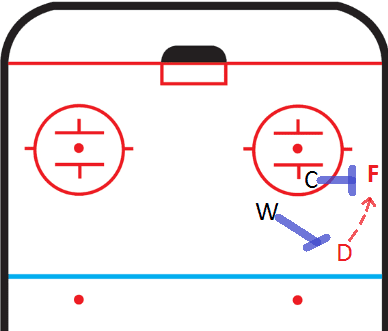 If the strong side winger does a great job of getting in the shooting lane, the opposing D will have no choice but to try to move the puck back down the halfwall to the supporting forward that is posted up. Getting that half stride in toward the opposing forward on the wall before the D actually releases the pass makes a huge difference when it comes to creating a turnover. Waiting for the pass to get there and then moving to get there always ends in failure. Remember the pupose is to take away time and space. Containing a player but giving them time is useless.

4.Strong Side D Pinch on Winger 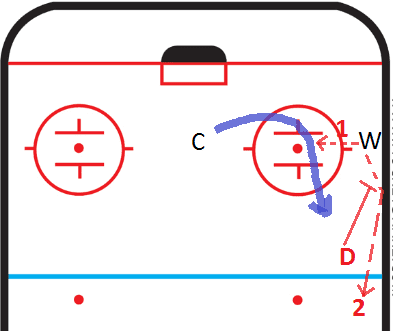 When regaining possession of the puck, a centerman acts as a set of eyes for both the defenseman and the wingers during the breakout. They must read pressure and let their players know what the best options are, not passively watch as a spectator. This is hugely important after a D breakout pass to the wing with a strong side opposing D barreling down the wall to pinch. If a centerman is able to anticipate this pinch before the first breakout pass, they will be in a great position to alert the winger and drive behind the over-zealous D for a chip off the wall.

5.When to accelerate to support the winger

Perhaps the most tragic mistake in “centermanship” (is that a new term?) is getting over to support the winger too early. Time and time again a centerman recognizes that the flow of the breakout is headed toward a particular winger and excitedly accelerates into a passing lane that has yet to come to fruition without a winger that is ready to pass. Yes a centerman needs to come over and support wingers on a breakout, but the timing of it is critical. Knowing how to belly in and out and take up space while simultaneously scanning for opposing forechecking pressures as well as a wingers body language for pass preparation is one of the most vital skills for a centerman. The whole success of the rush depends on this initial burst of acceleratory momentum generated by the centerman in a well-timed burst toward the winger.

Jim Vitale is a coach in the Greater Toronto Area and Owner of Vital Hockey Skills (www.vitalhockeyskills.com).
His passion stems from the application of principles of Physiology and Biomechanics to all areas of hockey skill development. Jim is a seasoned coach and has in-depth knowledge of systems as they pertain to team tactical play.