The Real Answer by Chris Beaudry 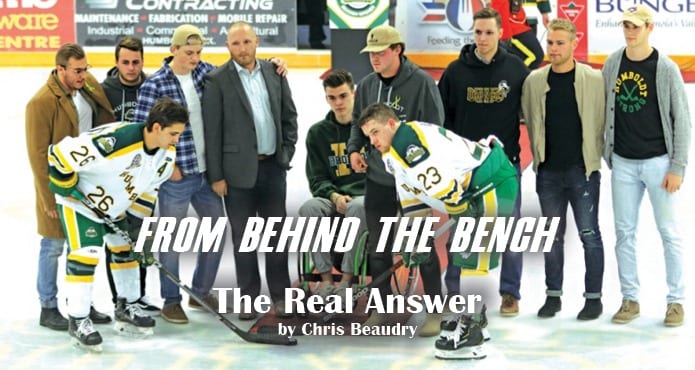 Chris Beaudry is a farmer, a father, a husband and a hockey coach with the Melville Millionaires. As an assistant coach with the Humboldt Broncos last year, he was driving his own vehicle 20 minutes behind the bus when the devastating accident took place. Recently, he was on the ice with the surviving team members to drop the puck to open the Broncos’ 2018-19 season.

In this installment of FROM BEHIND THE BENCH, Beaudry opens up about his own struggles with addiction, his goals for the future and how pain can help people heal.

My name is Chris Beaudry, and I’m an assistant coach with the Melville Millionaires (SJHL). I’ve been coaching since 2010.

I played hockey in Naicam, Saskatchewan. I’m probably one of the worst hockey players you’ve ever seen. But I love the game. I love being a teammate and being a part of something.

I had no future after playing besides rec hockey but I wanted something more. I felt that I could give something back. I started helping our hometown senior men’s hockey team as an assistant the first year. The second year, I became the head coach and worked with one of the Northeast Saskatchewan’s coaching legends, Barry Archibald. He did amazing things with Bantam AA and Midget AAA and, as a mentor, he opened my eyes to how a real coach operates.

When I was coached as a player, it was the old school way—my way or the highway, don’t question anything. Barry taught me calmness and showed me the proper way to interact with players. He brought a simplicity to the game.

I coached that team for six or seven years. While I was doing that, I started working with Saskatchewan Hockey Association in the SaskFirst program. I coached a Bantam team in Wadena, and then I moved on to Junior hockey with the Carrot River Thunder Junior B team, then the Prince Albert Raiders and I did analytics for the Mississauga Steelheads. And then I joined the Humboldt Broncos.

I get asked how I’m doing a lot and I often say, “Oh, I’m okay. I’m good.” But the real answer is that it depends on the day. It comes in waves and there are good waves of emotion and there’s rough ones. I go up and down. I was on a plane watching Goodbye Christopher Robin, and I cried for almost an hour and a half straight.

But it felt so good to be able to sustain that sad emotion. Before when I would cry, the tap would turn on and I would get a moment of serenity from all the turmoil I was feeling—all the weight on my shoulders and the pain in my stomach. When I cry, it goes away. But then the tap would shut off and I would feel bad again. Sustained emotion really opens me up and helps me grow even more. It’s what’s going to help me help others move forward.

In 2010-11, I was in a bus accident with the senior men’s hockey team. None of our players were severely injured, but the two people in the vehicle that hit us died. I was the most injured person on our bus—I had compartment syndrome in my right leg and had to be cut open so my muscles could swell outside my body for a few days.

When I got out of the hospital, I was overprescribed pain medication. I was given 200 pills and told to take two at a time, four times a day. The first day I tried that at home, I couldn’t get off the couch. I was so out of it that I couldn’t function.

Being that old, tough, rugged farmer, I thought, I can do it without these—I’ll only take one to help me sleep. That worked for a few weeks and the pain started to go away, but then I was hooked on them and I had 150 pills left.

I took the rest of them over a period of about three weeks. I’d go drinking and take five pills and completely get obliterated. I still couldn’t work on the farm yet, so my wife would go and I would take five more pills and just melt into the couch. When I finally ran out, I went through dope sickness, like heroin withdrawal—I shook and I puked. It was 10 to 12 days of absolute torment, followed by a month of wanting something I could not have.

After the Humboldt bus accident, I had feelings of relapsing but it was never to alcohol, which was very weird for me because alcohol was always my drug of choice. What I wanted was pills again. After the Humboldt accident, I had these feelings of anxiety, this weight in my stomach that would not leave. I was playing with my kids and I didn’t want to be with them, and that made me feel bad. I love my kids but I wanted to run away. I wanted to hide. I didn’t want to be near anyone. I knew pills could take all the bad feelings away.

I made the decision to relapse. I was driving and just before I got to the city limits, I was listening to Eckhart Tolle speaking on grief, and something he said just clicked in my brain, and a massive amount of weight left my body and the pain in my stomach eased a little. I picked up my phone and called my counsellor and went and had a meeting with them instead of throwing my life away.

Drinking in hockey is something that needs to be addressed more often because it’s looked at as okay. And it is okay to drink, if it’s managed in a healthy way, but drinking in hockey isn’t usually healthy. “Win or lose, there’s still the booze.” You hear that saying way too often.

The problem is that kids start forming bad life habits when they’re young. We talk about the car accidents and DUIs, but those aren’t all the negatives that happen. You start building patterns like using alcohol to cope; or you get imbalances in your brain and if alcohol doesn’t fix the problem, people turn to anger. And now anger, or alcohol and drug use, have evolved from being a small action to just stay calm before a game or to celebrate after, but now, after a sustained period of time, the makeup of your brain has changed. Now these are the things that you need to just get by in a day.

I’ve been sober for five years but I let the players know that I’m an alcoholic and I always will be. I share a few goofy stories at first to create trust. It helps to say, “Hey, I’ve done what you’ve done. I know what it’s about.” And then we build trust throughout the year so eventually I can say, “If you’re having problems we can talk.” And then we can go deeper.

Helping boys become well-balanced men is a passion of mine. To see someone come in who struggles in life or in hockey and helping turn their around life is something amazing. To be a good role model for young kids and help them become good men, good fathers and good husbands, that’s what I’m looking to do.

My coaching goals have changed drastically over the years. When I originally made my first goal, I wrote it on a piece of paper on January 1st, 2014. It was that within five years, I’ll be a paid coach and within 10 years, I want to be making a living coaching. It had a lot of ego in it.

And that’s not the person I am now. I don’t want to live my life driven by my own ego.

I don’t know what level I want to coach at, Junior A or the WHL or college hockey, but what I want to do is to positively affect boys’ or men’s lives in a way so they can be better humans, and then pass that along. Where that takes me, I don’t know. I don’t know if it’s in pro hockey or not. I’m okay with it as long as I’m still able to help people.

Advice For Young Coaches + The Rest of the World

As a coach, you have the ability to help shape boys’ lives, so do not pass on bad habits. Relate the things that you’re poor at, because it will help them open up and talk about the things they’re not good at. They’re nervous, they have low self-esteem, they have troubles, and when we can relate to it, it helps build that relationship and makes it easier for them to share.

I’m constantly in touch with the Humboldt kids. Even if it’s just a check-in to see how the weekend is, how hockey or training is going. I’ll send goofy things from around the farm that I’m doing. Anything to keep our communication lines open because we’re family now.

To the rest of the world, I’d say: Don’t forget about the boys, but don’t feel sad when you think about what happened to us there. There are going to be good things that come from this—Logan Boulet’s is an amazing story already. (Boulet donated several of his organs to others in need and for scientific research.)

The boys who died lived great lives and the boys that are still alive are going to do amazing things in memory of these boys. 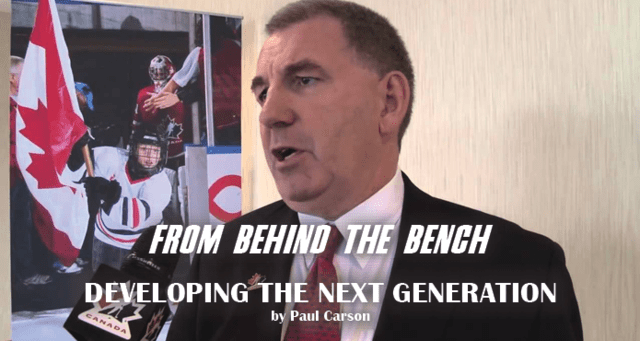 Hockey Canada’s Paul Carson on developing the next generation