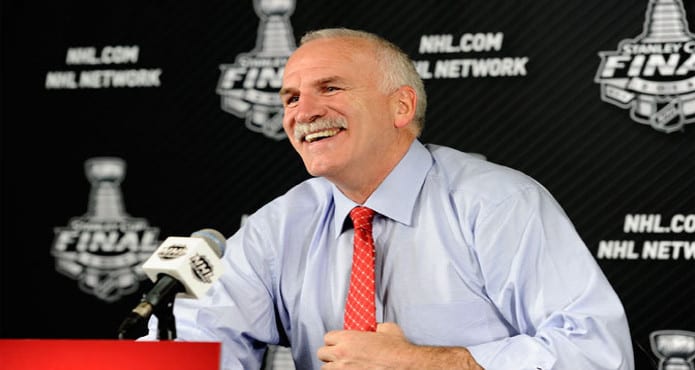 Coach Joel Quenneville’s secret to success is driven by an insatiable desire to win, as he yells and screams on the bench and radiates with energy and passion to see his team succeed. Coach Quenneville is already creating a legacy by having coached the Chicago Blackhawks to the 2010 and 2013 Stanley Cup Championships. In his 454 regular season games, the Blackhawks have landed a record of 268-127-59. His winning percentage of .655 is the best in the history of the Chicago franchise while his .606 post-season winning percentage is the highest for a Blackhawks coach since 1926.

Coach Q’s winning coaching methodologies originated during his 13 seasons as an NHL defenseman. The driving force behind his victories has revolved around placing defense as a top-tier priority in all games, which is not always an easy philosophy to sell to Blackhawks players who are abundant with top-tier talent. Yet, this gives his stars freedom on offense, which wins the buy-in of his top team members. By focusing on defense, they are well-prepared for any situation during a game.

Also, Quenneville takes the time to nurture, coach, mentor, and develop the individuals on his team while also molding them as a well-oiled, cohesive machine in perfect synchronicity with each other. By coaching his stars to function as a team without sacrificing their individual and unique personalities and styles, his team triumphs over obstacles and each star is driven to succeed both individually and as a whole. Also, by facilitating an atmosphere of cooperation and collaboration, the team is stronger and a force to be reckoned with on the ice. Everyone is involved in the victory over opponents, and this generates excitement, enthusiasm, and camaraderie amongst team members.

Despite Quenneville’s feisty fervor on the bench (but not to the point of throwing chairs like the Hoosiers’ Bob Knight), he takes the time to listen and balance his own needs with those of his team. He practices an open-door policy demonstrating that he is authentically keen on hearing the concerns and wishes of his individual players. Such open communication and his astute ability to listen validates his players and makes them feel important. Such listening and honoring of individual needs helps to manifest a strong win-win situation.

Coach Q  also is known to stress leadership and responsibility not just in sports but in all aspects of his athletes’ lives. He wants them to take these values out onto the ice and into their life situations. Being model citizens and not just ambitious sportsmen are his primarily wishes as he coaches his men to be winners in all that they do. He demands that all players fulfill their full potential all of the time.

As a result of these philosophies, Coach Quenneville catapults his players to be true champions, both on the ice and in the world. He encourages them to see that desire to win may the key to motivation, but it’s the determination and commitment to the pursuit of a goal with 100% excellence that makes true success possible and sustainable.