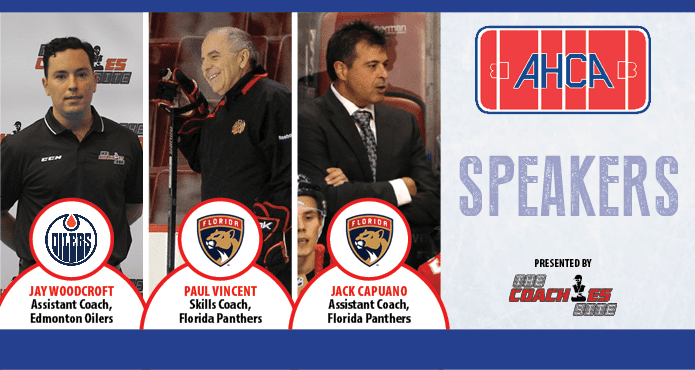 The Coaches Site is going to Florida! Could there be a better place to immerse ourselves in the greatest game on ice than the warm beaches on the shores of the Gulf of Mexico?
The American Hockey Coaches Association’s (AHCA) Annual General Meeting takes place April 25-28 in Naples, Florida. This will be our 3rd year attending the convention and it’s an event we’ve been looking forward to all year. Drawing a crowd that displays no shortage of passion for the game, the convention provides a great opportunity to grow and celebrate the game of hockey.
We are proud to sponsor this event and, along with our entire stellar team, we are bringing three incredible speakers to captivate and inform the audience on the latest coaching trends.
Paul Vincent
Head Skills Instructor, Florida Panthers.
Hailed as one of the best skills coaches in the game, Coach Vincent has won a Stanley Cup and an NCAA Championship and has worked with too many teams and elite players to name.
Jay Woodcroft
Assistant Coach, Edmonton Oilers.
Starting his coaching career as the video coach with Mike Babcock’s Red Wings Coach. Jay moved on quickly becoming an assistant under Todd McLellan San Jose Sharks in 2008, Woodcroft then joined the Oilers coaching staff in 2015.
Jack Capuano
Associate Coach, Florida Panthers.
First coaching in the ECHL, Capuano joined the NHL coaching staff with the NY Islanders in 2005. He then coached the Islanders’ affiliate, the Bridgeport Sound Tigers, rejoined the Islanders until 2017 when he moved to the Panthers.
We’ll be taking in the presentations and greeting attendees at our booth. Stop by and say hi!
And if you can’t make it down to Florida but still want to hear what the Vincent, Woodcroft, and Capuano have to say, don’t worry. We’ll be capturing their presentations and releasing them on our Members Site. Sign up for your FREE month at TheCoachesSite.com/Members

He has coached 13 players that went on to become first-round draft picks.