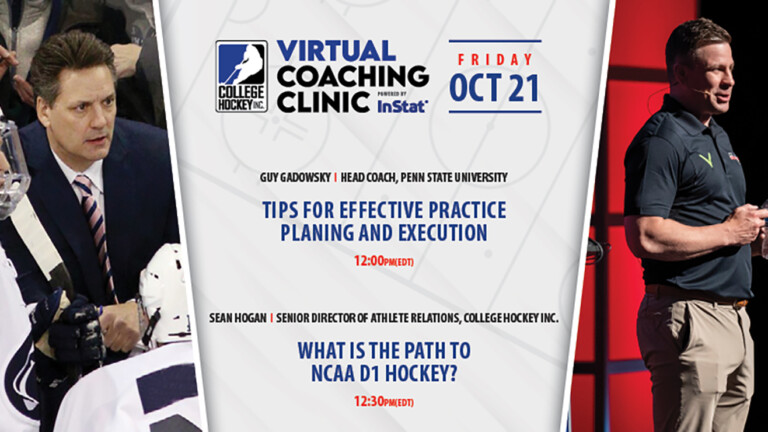 That’s a wrap on the College Hockey Inc. Virtual Coaching Clinic! *pause for applause* Friday ended the event with a bang thanks to a look at how to plan and execute better practices, and info into which path to a higher level of hockey might be right for your players.

This exclusive event was only available to members of The Coaches Site. Join now for full access! Once you become a valued member, the Virtual Coaching Clinic presentations can be viewed for 30 days. Don’t miss out!

For as much as Guy Gadowsky, Head Coach at Penn State, loves practicing, he doesn’t want his team on the ice any longer than it has to be.

Gadowsky gave a look behind the scenes at how Penn State plans their practices to be as efficient and effective as possible. Most hockey programs don’t have the incredibly large staff he has, but there is a lot to takeaway about how he uses practice time.

What is the Path to NCAA D1 Hockey?

Sean Hogan, Sr. Director of Athlete Relations with College Hockey Inc., understands how stressful hockey decisions for players in their early teens can be. Which path is the right one for them? Great question. Hogan’s presentation outlined that there are a variety of paths and he highly recommends the NCAA route.