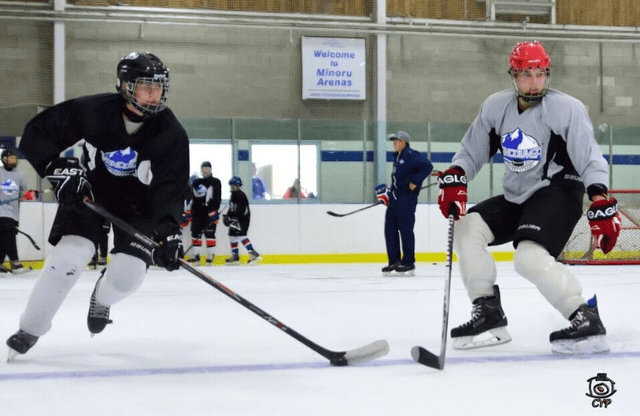 Learn more about the difficult skill of transitioning from forwards to backwards. Derek Popke is back to share some simple tactics to master this skill.
0
(0)

As a coach or parent of a young defenseman you watch in agony as your future star continuously gets skated around while attempting to play a 1 vs 1. You hear the coach or parent yelling in desperation “pivot, pivot backwards” without success. Most 1 vs 1’s require the defenseman to skate forward, close the gap and then transition from forwards to backwards. Transitioning F>B with speed and confidence is one of the harder skating mechanics to teach young players. It requires balance, power crossovers, and squaring of the shoulders.

The most common error young defenseman make when initiating the F>B transition is leaning too far forward, which causes the player to be off balance.

Second, young players tend to keep their feet too close together entering the transition. This hinders the ability to gain speed using a power crossover when exiting the transition. Players should focus on having an athletic stance with their feet apart. This stance will improve balance and edge control leading into the first F>B crossover.

From the athletic stance, players should initiate the transition heels first.

“The more quickly a player can turn his or her skates so that the heels are leading the transition, the more rapidly the player can initiate the first backward crossover.”

Players should focus on extending the reach and drive of the inside skate to gain more power from the crossover.

Finally, it’s important to square the shoulders mid transition. It’s really important for players to rotate at the hips allowing the shoulders to face forward. This position will allow players to drive straight backwards during the crossovers. In turn, helping the player maintain gap on the opposing player. A great way to practice this technique is by transitioning from F>B in a straight line. This will allow the player to start gaining ice while moving backwards more quickly, thereby matching the speed of the offensive forward.

It’s important to remember the F>B transition is a challenging skill for young defenseman to master. It requires patience and repetition. Focusing on an athletic stance, power crossovers and effective shoulder positioning will help young players transition with more speed and confidence.

Access to our entire library of videos and articles with a Membership to The Coaches Site. You can cancel any time, although after joining a community of coaches from all over the world using the videos on a daily basis to pick up new tips and stay relevant, we doubt you will.