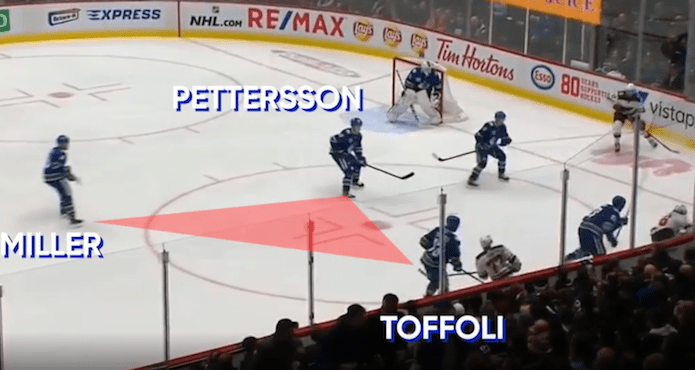 It's a common defensive zone strategy used by NHL teams.
0
(0)

With the NHL announcing their plan for getting back into game action, you can bet that every playoff team is taking this time to study as much as they can about their play-in opponent. Pouring over the video to inspect their power play formation, set faceoff plays, etc. in order to figure out ways to contain their strengths and exploit any weaknesses.

For coaches of any level, there is also value in studying how NHL teams execute strategic systems at the highest skill. What strategies are effective and why? What types of player personnel are needed and what causes breakdowns?

As I do some prep work for some playoff analysis, I wanted to share some takeaways that I have had. Today, I want to focus on play away from the puck by taking a look at a common defensive zone strategy employed by NHL teams.

The scheme we’ll be discussing is the strong-side overload.

In this strategy, defending teams are looking to split the ice in half with the goal of outnumbering their opponents. By limiting the attacking team’s time and space to maneuver, defending teams are pressuring turnovers and can quickly break out due to the positional support and numerical advantage built into the strategy.

As you can see, all five defending players are shifted over to the strong side of the ice. The F1 is in constant support of the defender pressuring the puck and makes sure that there isn’t a clear lane to drive to the net if the on-puck defender gets beat.

The strong side winger (F2/F3) can jump in and help if there is a scrum along the boards but his main role is to provide a passing outlet should their team win back possession of the puck while also being prepared to cover the point man.

The forward in the slot is crucial to the success of the overload strategy. Because the defending team is committing to a numbers advantage on one half of the ice, that means there is potential for an attacking player to float behind the defence and find himself alone on the weak-side. This is where the forward in the slot needs to have his head on a swivel and be sure that any passing lane to a sneaky attacking player is covered.

The other key aspect of this strategy is how defending teams adjust when the puck is moved from one side of the ice to the other. This is where we can inspect some video for a real-world example.

In the following clip, the Vancouver Canucks’ top line of Elias Pettersson, J.T. Miller, and Tyler Toffoli does a fantastic job of holding their structure while the puck is moved from the right-wing corner to the left. As the puck bounces to the right-wing corner, Pettersson (#40) is the first defending player in position to make a play on the puck. Troy Stecher (#51) is goal-side to support him and Miller (#9) and Toffoli (#73) move into their positions to overload the right-side.

It's a common defensive zone strategy used by NHL teams . . .

Sharing my passion for hockey through video and analytics. Vancouver native working in Toronto.