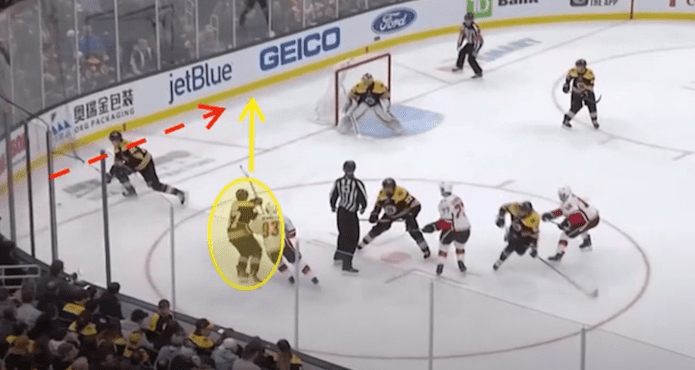 As the best face-off team in the NHL for the last decade, we can learn a lot from the Boston Bruins.

In the first of a three-part series looking at the Bruins’ set face-off plays in all zones, let’s take a look at their work in the defensive zone.

One thing I’ve noticed, is the confidence of the five players on the ice. Maybe that’s because they’ve got Patrice Bergeron so they win the draw more than anyone, but most of the time, they use a 4-1 setup, with just one defenceman lined up behind the centre. Here’s a look at eight different face-off setups they used in the defensive zone last season.

It starts with a straight win behind the centre. The winger on the wall and the outside winger then bolt for the neutral zone.

Most of the time, we will see the D trying to bank the puck off the wall behind the forwards. This has to be done quickly because a turnover from here could be brutal.

One thing I’ve noticed about Boston, is they don’t always put the forward on the wall, sometimes it’s the other D who’s there, ready for a reverse play if the bomb is not there or the draw isn’t won cleanly.

This is a defensive setup more than an offensive one, but still. The first thing I noticed is no one is on the wall for both teams. Again, it’s a 4-1 setup.

By winning the face-off, the Bruins are in a great spot. They can chip the puck on the strong or weak side or even use D2 for a D-to-D. Overloading one side with the inside winger popping out quick is a great idea.

Mitch Giguere ChPC, is the father of four children and a passionate hockey coach. He is the video coach for the Torpedo Nizhny Novgorod (KHL) and the assistant coach for the Concordia Stingers (USports), and former video coach for the Winnipeg Ice (WHL). Mitch has his High Performance 2 from Hockey Canada and has an Advanced Coaching Diploma (NCCP4) from the Canadian Sports Institute. See All Posts By Mitch