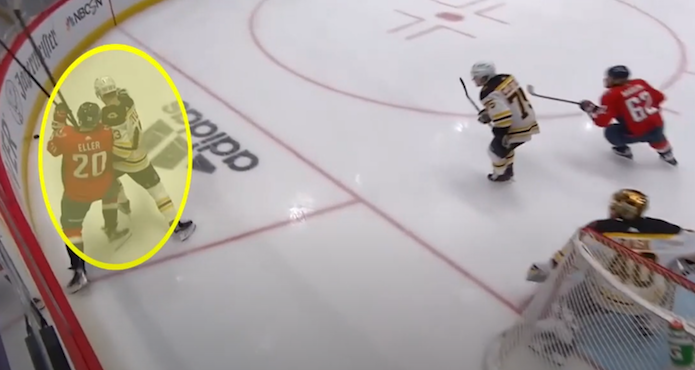 I have done more articles on the Boston Bruins than any other team. It’s not because they are my favourite team, I just love the way they play.

Looking at the first round of the playoffs, Boston only allowed 10 goals against in five games against the Washington Capitals, for a stingy average of two goals-against per game. Let’s take a look at some of key reasons why they have one of the best defensive coverages in the league.

We often talk about “five on a dime” or “five in the picture.” If we look at Boston, they are not giving time and space to anyone.

On a D-to-D, the wingers quickly react while the centre gaps up on the high forward. Both defencemen are following their man, and they are boxing out. When everyone is on the same page, it is hard to break their defensive zone coverage and create any offence.

One thing I have noticed this season and it has continued into the playoffs is the way the Bruins’ defencemen are playing.

This only works when through good communication and understanding of when players are going to “switch.”

With an average of 17 blocked shots per game, Boston tries to be in the shooting lane as much as they can.

They are leading with their stick first and following with their body. Blocking that many shots helps Tuukka Rask a lot by allowing him to stay fresh for longer. When a forward blocks a shot, he will keep skating towards the puck carrier, reducing time and space for the defenceman to make a play or get the shot through.