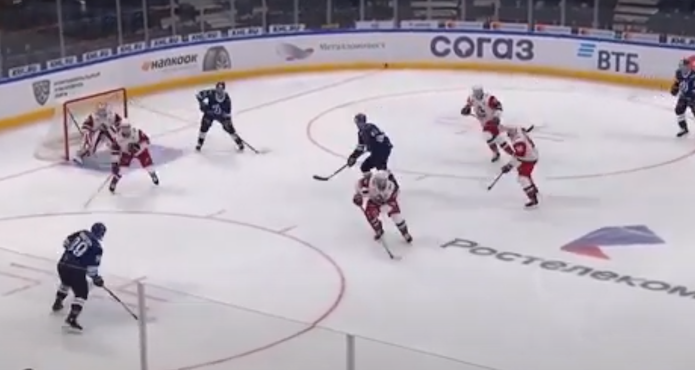 It’s always interesting to see how teams from around the world approach the game differently.

I have been working with Torpedo Nizhny Novgorod in the KHL for over a year now, and I’ve seen a lot of different hockey.

In this article, I have broken down the Dynamo Moscow in-zone power play. They always seem near the top of the league when it comes to power play efficiency, so let’s find out why.

The main reason why they have success on their 5v3 is because of their middle guy. In their system, everyone is rotating and moving somewhere on the ice, to the point where the opponent occasionally forgets about the middle guy.

What happens next? A quick pass with a quick one-timer, and it’s in the back of the net.

2. Working around the outside

Most of the rinks in the KHL are “Finnish rinks.” What does that mean? Finnish rinks are 60×28 metres. An Olympic rink is 60×30, and NHL is 60×26. Having that extra space with the width of the ice is a significant advantage in my opinion.

In the video below, we will see how much time and space the three players on top have to exchange the puck and open up the defensive coverage. If you are taking a shot from the outside of the dots, you have to have more power on it, but with players around the net and screening the goalie, Dynamo has done a great job at executing this setup.

This is probably my favourite setup. Playing behind the net and having a player on each side as a one-time option, can be extremely dangerous. They use two options behind the net. Either they are making passes below the goal line, or only one forward is carrying the puck and making the pass for a one-timer.