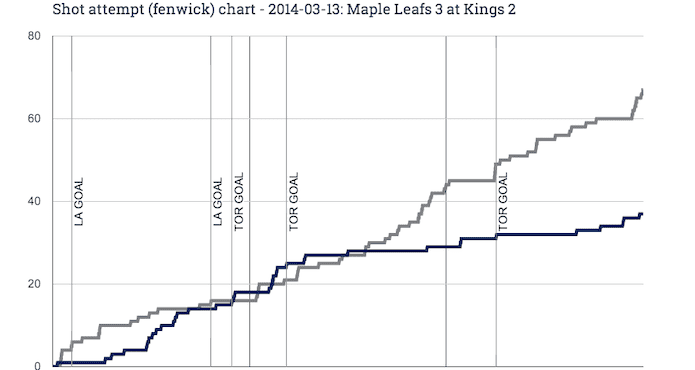 We’re coaching an age of statistics. Never before have minor hockey players been so obsessed with goals and assists – or, perhaps they always were, but these days they see enough importance in individual stats that they’re willing to ask their coaches to add missed assists to the scoresheet. You scowl. “It’s about the team!”

Of course it’s about the team, but you know what helps the team win? Goals and assists. And regardless of their motivation, hockey players want their contributions to success to be tracked forevermore in the annals of hockey history.

But we all know there’s a lot more going on with each goal and assist, and sometimes contributions to the offense aren’t tracked by traditional data points. Enter advanced analytics: from corsi to PDO to defended zone entries, analytics in hockey are finally catching up with baseball and other sports that track the details that contribute to success on the field.

Want to teach your players about the value they can bring to the team even if they don’t score all the goals?

Fenwick is a statistic that’s:

So, say you have a player who has a shift in which they record two shots on net, one that misses, and another that’s blocked. Pretty good shift, right? Oh, and their linemate had a shot on net as well, all without giving up any attempts in their own end. So, for every player on the ice during that shift, their Fenwick would read:

And the other team? You guessed it, they’d all be -3. If the opponent manages a single unblocked shot attempt, then they’d be up to -2.

Fenwick encourages teamwork. If a player makes a pass to a defenseman who then gets a shot through from the point that just misses the net, both players get rewarded. So if you’re looking for an in-depth measuring stick for your team in the second half, and you’ve got a willing parent or volunteer, have them fire up the ol’ laptop excel machine and get counting.

Here’s what a typical fenwick chart for one game looks like. Pretty good night! 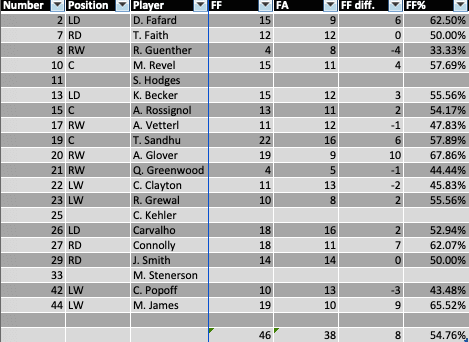