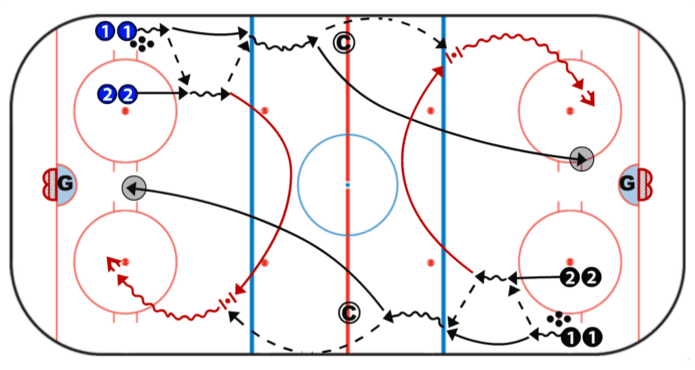 Players form two lines on opposite hash marks. Two (C)’s line-up inside the neutral zone on opposite sides.

1.      On whistle, both sides leave at the same time. O1 and O2 (both sides shown). O1 and O2 leave up ice exchanging one-touch passes until O1 (near boards) receives final pass once reaching the near blue line.

2.      O1 skates with the puck a few strides inside the neutral zone, (C) pressures O1, O1 soft chips the puck by (C) into a good area, O2 now drawn in (RED) breaks off and moves in toward the chipped puck.

3.      O2 acquires the puck moving in from the outside wide toward the net for a shot on goal, O1 once chipping the puck drives the net for rebound.