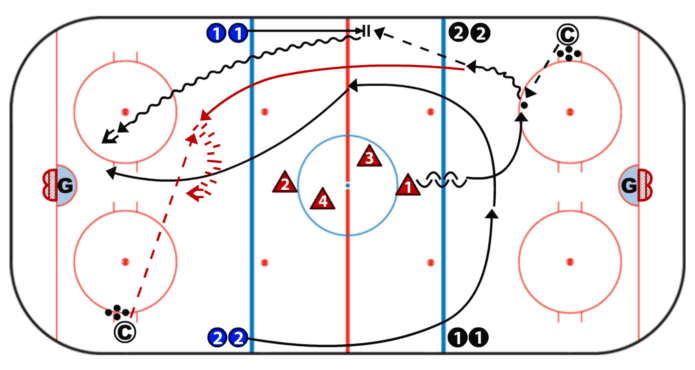 Forwards line up outside all four blue lines. Defensemen are located just inside the neutral zone outside the center circle.

1. On the whistle, both sets of forwards leave (one side shown).

2. (C) spots a puck for D1 to retrieve in the defensive zone. O1 posts up inside the neutral zone; O2 swings low.

3. D1 skates with the puck a few steps forward then moves it to O1 inside the neutral zone. O2 provides support.

5. Now drawn in (RED) D1 follows the play up ice to receive a pass from (C) ; D1 drags the puck into middle before shooting, with O1 and O2 in front.

Have the F entering the zone with the puck delay and hit the D joining the play late for a shot on net.

After initial shot, (C) spots a second puck in the zone. Offensive players set up a low or high cycle; play out until whistle.

•Drill starts on the whistle

•D start backwards, retreat back quickly and move the puck up ice 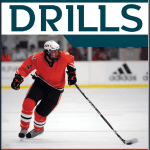