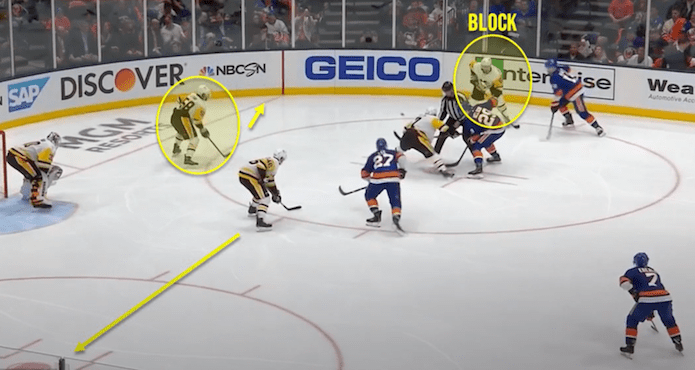 When your team is on the penalty kill, you want to spend the least amount of time in your own zone as possible since you are a player short. On every faceoff, you have the chance to win it and clear the puck 200 feet or, lose the draw and start defending in your zone.

That’s why it’s important to have a plan. If you prepare your players, you will spend less time defending in your own zone.

Now, having a plan is one thing, but making sure your players execute the strategy to control the puck off the draw makes the job of penalty killers a lot easier. It’s the difference between having the puck for the first 10-15 seconds or chasing it for half of your shift.

Here are eight variations of the most common faceoff plays used during the 2019 NHL playoffs.

Boston and Tampa Bay are well known for using this faceoff formation.

Be careful on a loose draw, if the opponent wins the battle on the wall, passes for a D to D, it’s a long way to go for both defencemen. You can always send your centre or winger to pressure the puck carrier.

On this faceoff alignment, you will have a defenceman on the wall, centre on centre, a winger on the hash mark in the middle, and your second D will be right below him.