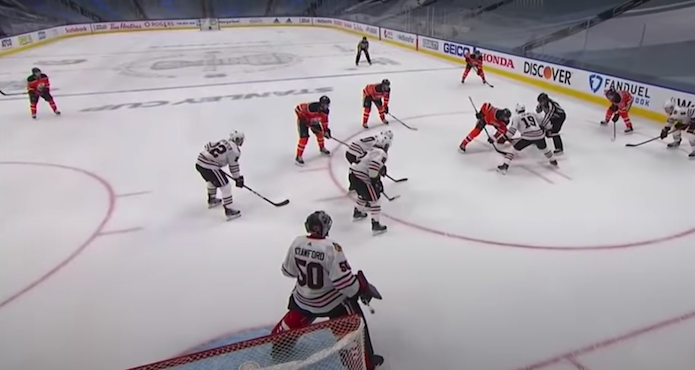 It’s near the end of the third period and you are down by one goal. How important is it to already have a plan in place when you pull your goalie and have an offensive zone faceoff?

I have watched parts of the last two seasons’ six-on-five goals and sorted them into seven categories. The biggest thing that I noticed is that teams take their time to set up, and they attack after. Everything was done within a short amount of time after winning the faceoff.

You win the puck back, give it to your “QB” and then pass it to the wall. This is a faceoff that’s easy to do at every level. Notice the goalie presence during the play but more importantly, the shot coming from the player on the wall. It doesn’t need to be the hardest shot, but it’s precise and hits the net.

2. Around using the width

At a quick glance, you may think that this play is similar to the previous one. However, they make more passes. Puck starts with the QB, passing to the wall and getting it back. From there, you can use the width of the ice and look to see the defenders sliding, which will open up passing and shooting lanes.

What if I told you that this one had the most success when teams used it?