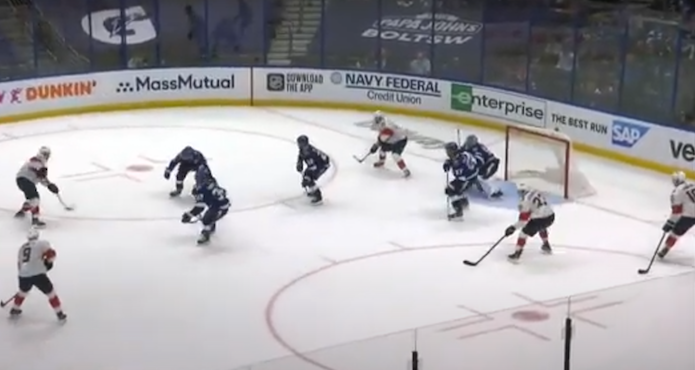 Aleksander Barkov will start the power play as the centreman and switch to become the power play quarterback right after, while Sam Bennett starts off on the point for the faceoff and switches to the flank later on.

Let’s do a small breakdown on why they have success with five forwards and see if some teams will follow their lead in the future.

Having a player like Barkov on the drop pass on the breakout is a luxury.

Usually, the puck carrier must go down low in the offensive zone, stop and set up. With Barkov carrying the puck, he can slow down right as he crosses the blue line and take the middle while his teammate is going hard at the net. The second advantage with Quenneville’s system is they do not have a set position. Barkov can rim the puck on the entry, stay on the flank, and play as a flanker.

It is a very fluid set up.

What if you ask your players on the power play not to play the same position? Let’s take a look at how the Panthers love rotating their top player (FLA16) with their flanker (FLA9). Usually, Barkov will play on top, but we can see Bennett playing and staying there as well.

From this, what if you had a rotation with the bumper, one player coming in and the other one coming out? And when Huberdeau gets the puck, why not ask your right flanker to go back door? This means you would have three players around the net… crazy!