From a Fan: The 2016 World Junior Championship in Helsinki 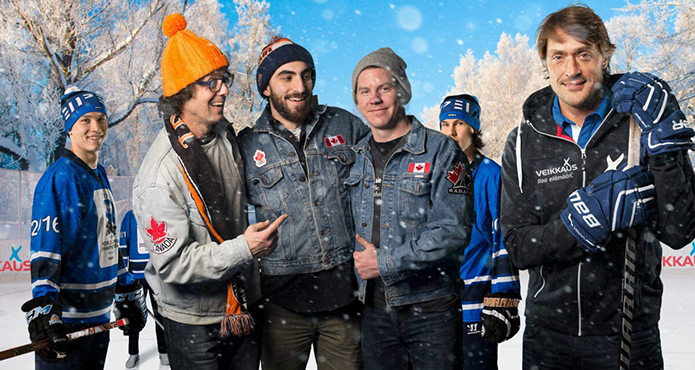 "The Finnish people really made the trip a positive experience. Their openness and willingness to share their culture was the cherry on top."
5
(2)

Helsinki might not be the first place you would consider going for your Christmas vacation. As described by writer Tony Gallagher, “It’s a winter wasteland with subzero temperatures and little to no daylight during the winter months.” Although Mr. Gallagher’s words may have some merit, a small group of close friends, including myself, couldn’t have had a better time over the holidays in the hockey paradise that is Helsinki. After traveling to Malmo for the 2014 tournament and having an incredible European hockey experience, we decided to go back for the 2016 edition of the tournament.

In Malmo, we prepared by making jean jackets with Hockey Canada insignia on them to create a game day alter ego of “Hosers,” loosely based on Bob and Doug Mckenzie of SCTV Great White North and Strange Brew. During the tournament, with inspiration from watching various hockey movies (Goon, Slapshot, Youngblood, etc.) we created signs that would help us exude the persona of the hockey loving Hosers we have created. 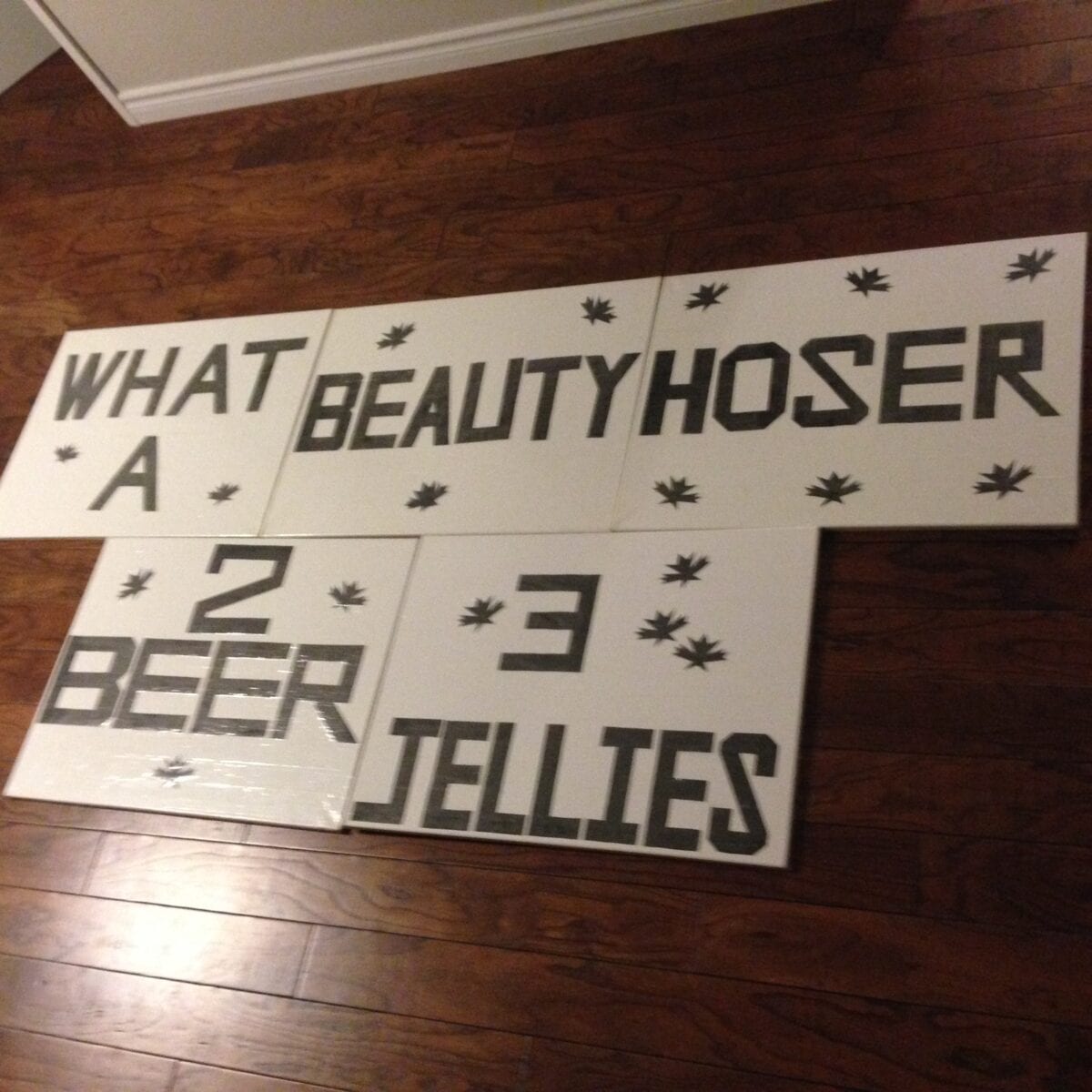 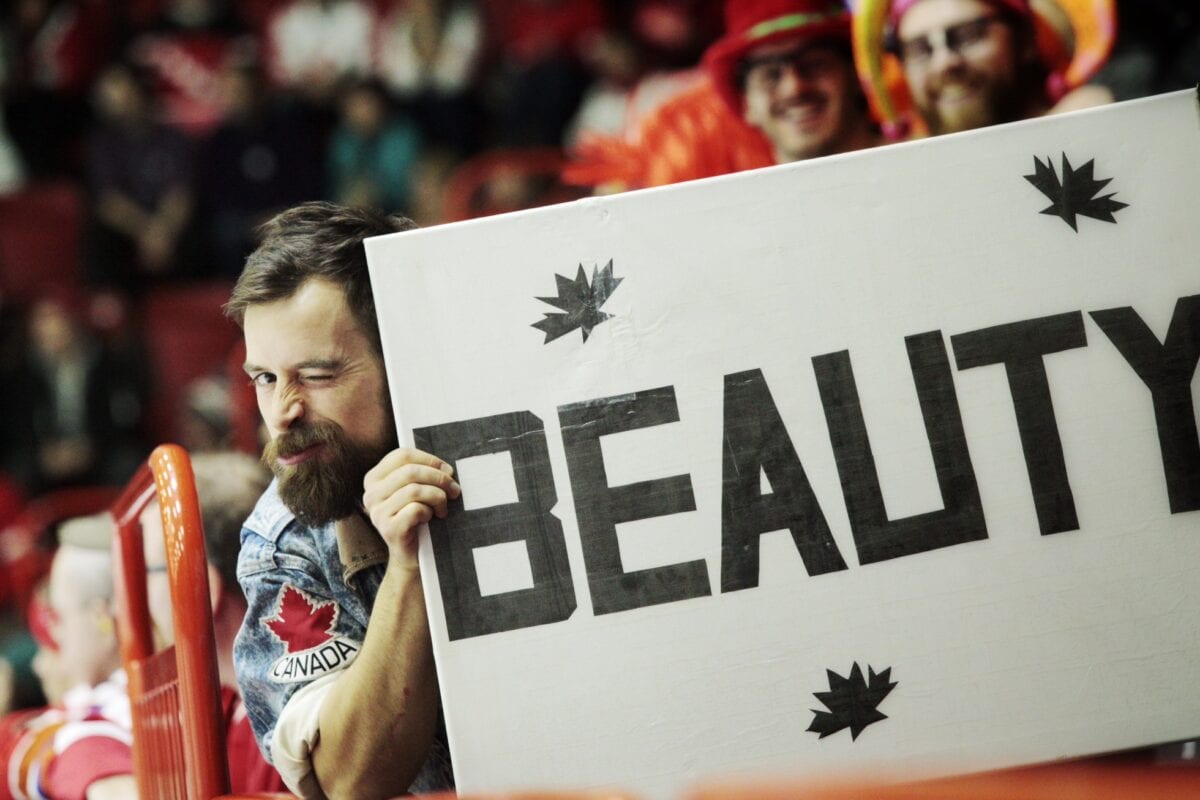 What is the purpose of all this, you may ask? It goes along with the tournament and our experience, while trying to grow and perpetuate Canadian hockey culture. The reason for the long trips over the pond to watch the game in Europe is A: the tickets are dirt cheap, and B: the hockey culture is much different than what you see in North America.

If it’s the Swedes who have numerous chants and songs to cheer on their squad, or the non-stop energy and focus the Finnish have to watching their games, the atmosphere is different in Europe. We wanted to revel in it and add to the ambience. The purpose then was to have fun by pushing our own Canadian game day culture past just drinking beer and chanting “Go Canada go” – although both are very important things! 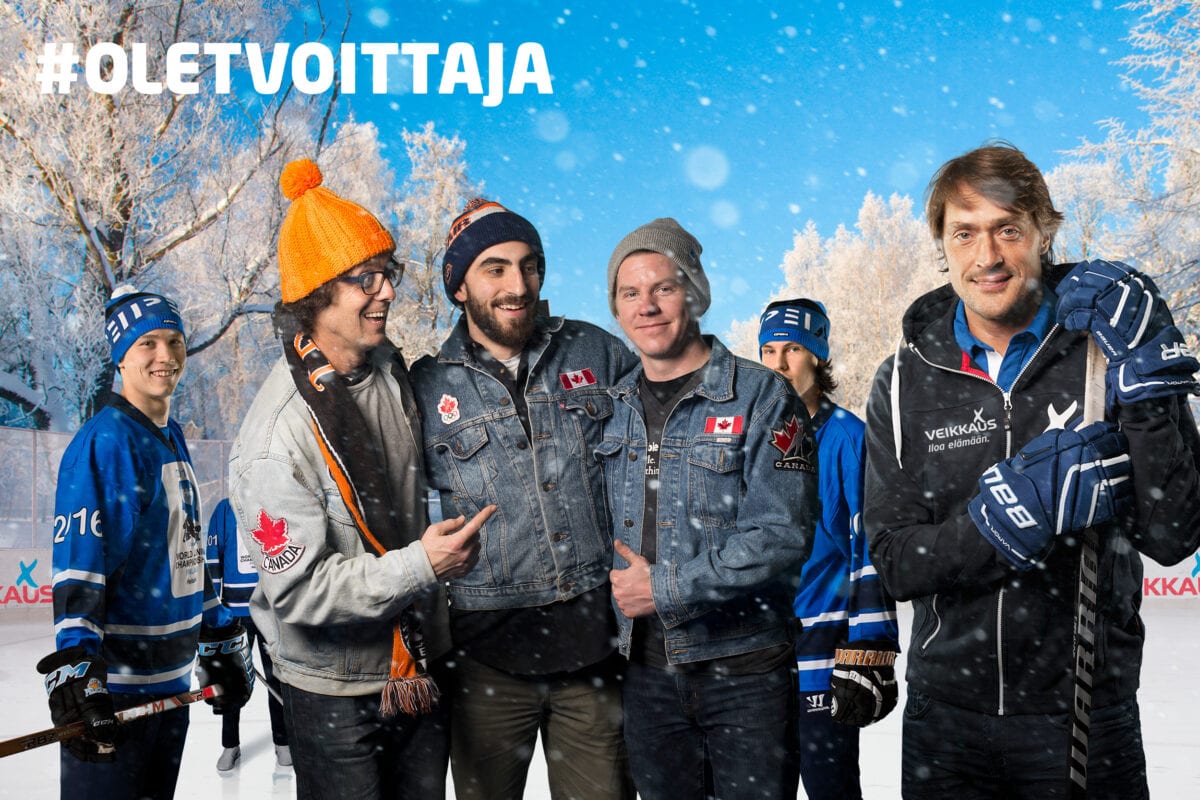 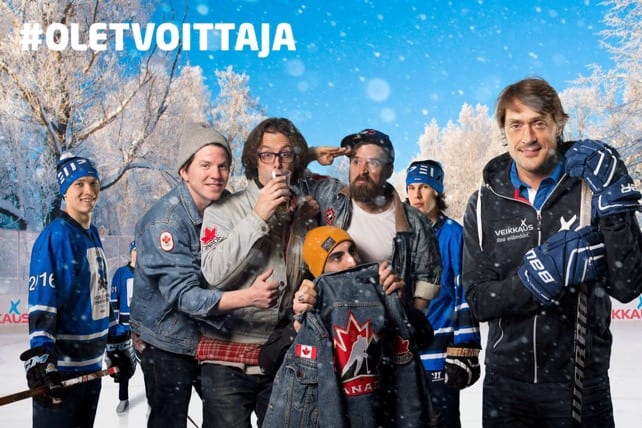 For the 2016 edition of the tournament, we prepared by first doing our research into Finnish Hockey Culture and discovered every neighbourhood has a public rink that is maintained by the city and is essentially open all day for people to go out and use as they see fit. After finding this out we did as any sane hockey loving Canadians would do and we took our sticks and skates so we could add yet another element to our trip. We were on the ice every day except New Year’s Day and had some of the best interactions with locals we had the entire trip.

Sunday was the big day for games with the entire soccer pitch sized sheet covered with people playing games of shinny and public skating. The spirited games against the locals will be something that I will never forget! 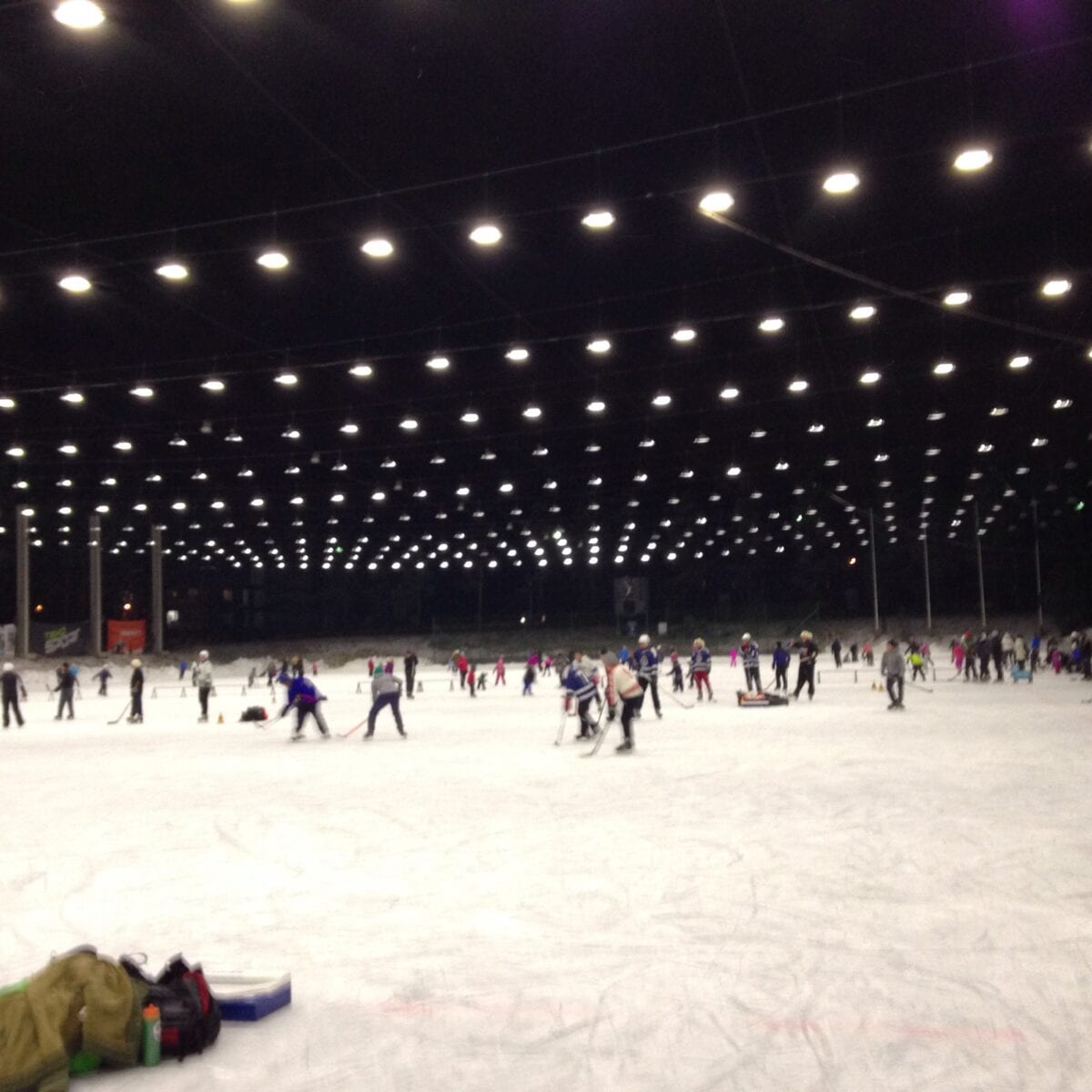 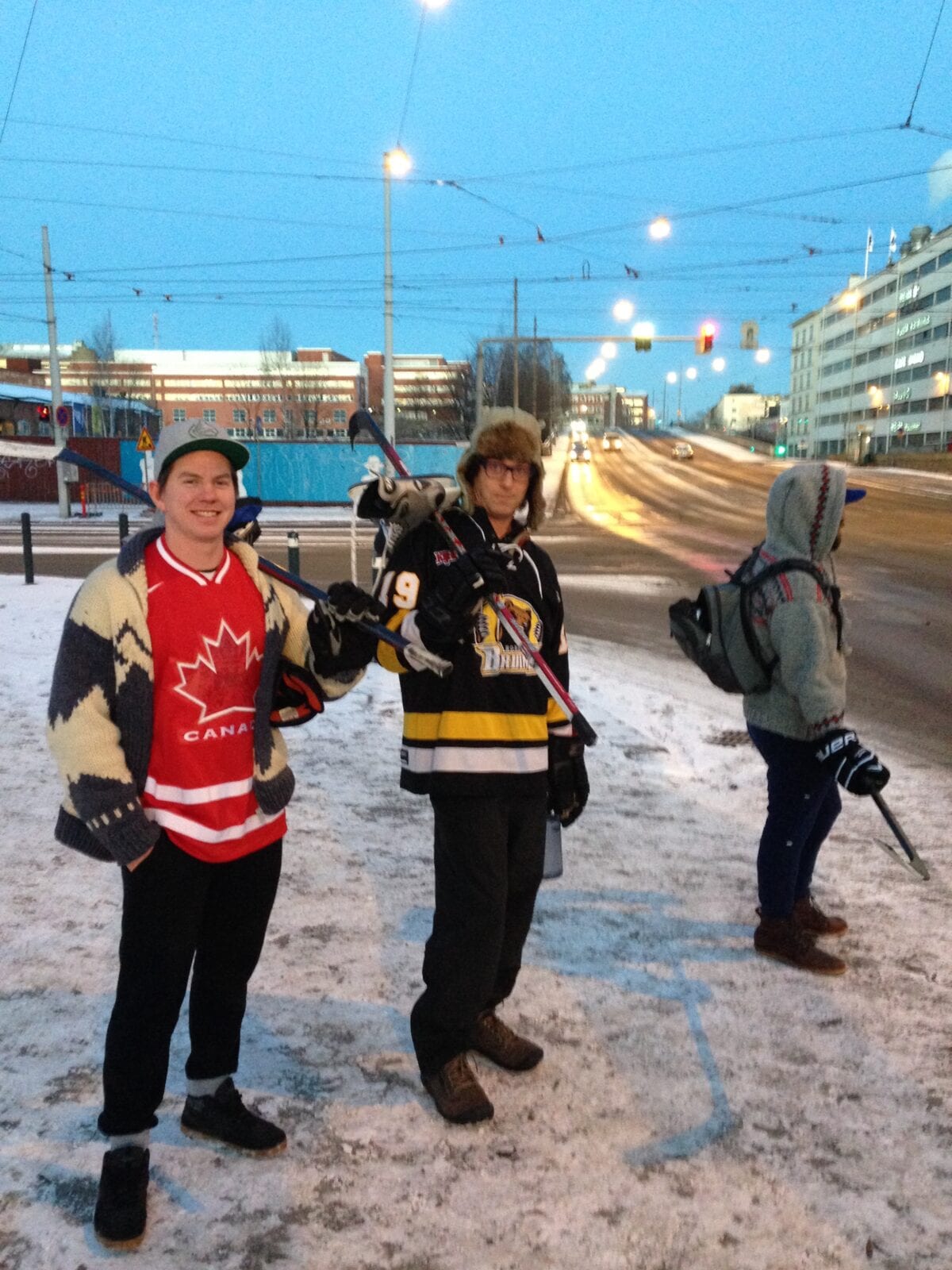 The second thing we wanted to do was break the ice at the games with a Stiga hockey table. Stiga is made in Sweden and as we would find out it is almost a rite of passage in Scandinavia with most 11 & 12 year old boys receiving the table as a Christmas gift. We can only assume this is true because as we went to the store looking for replacement pucks and discovered all the games tables were sold out.

We breathed a sigh of relief that we had brought our own because the table provided us with some amazing interconnections before games and during the intermissions. We would have fans crowding around the table chanting for their country person as we played a little side match to the game that was happening on the big ice. Here we would try our new chants trying to push the boundaries of the monotonous “Let’s Go Canada” regaling the crowds with “Maple Syrup” and “Not a Beanie. Toque! Toque! Toque!” while brandishing our signs from Malmo. This was all part of our mission to grow the Canadian hockey spectator culture. 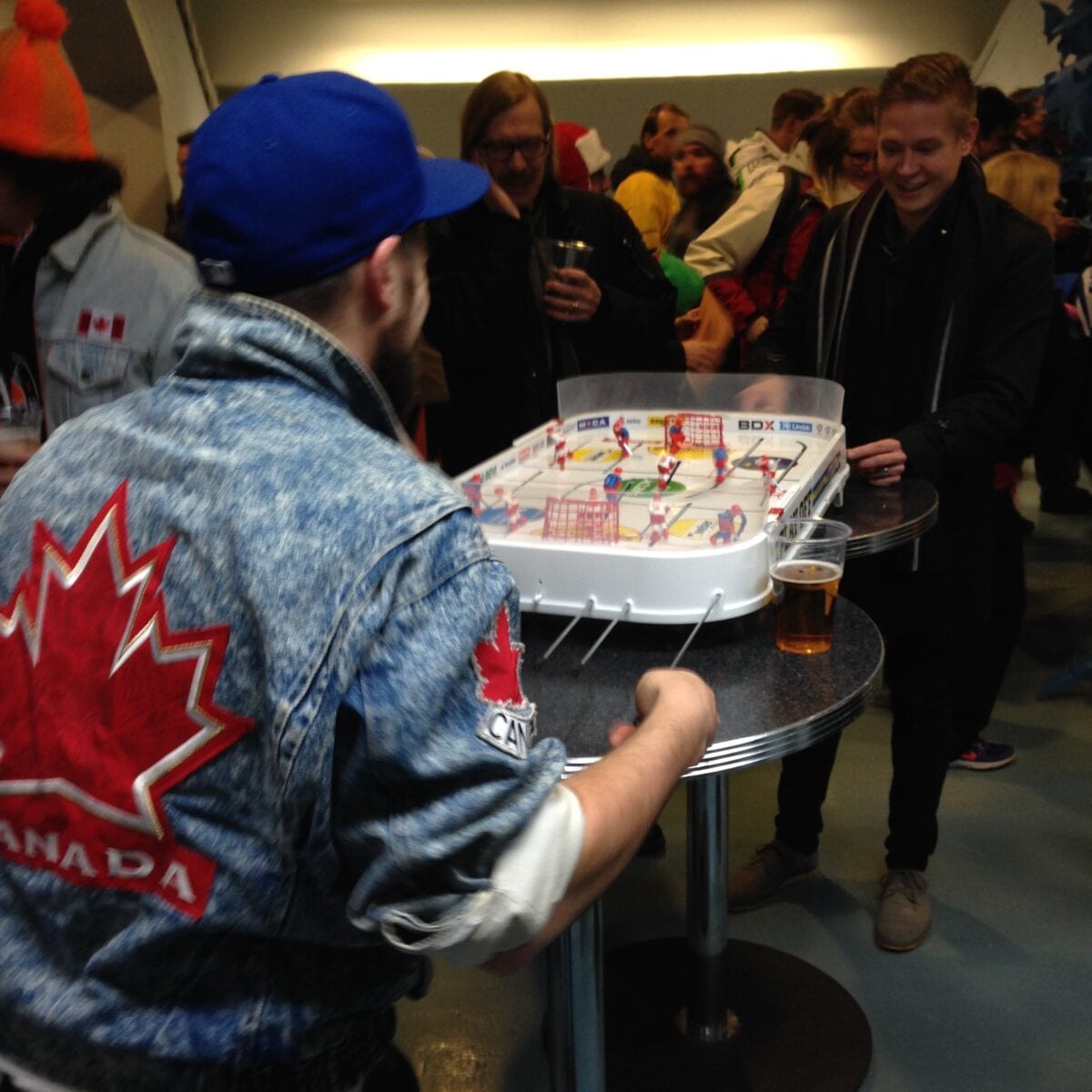 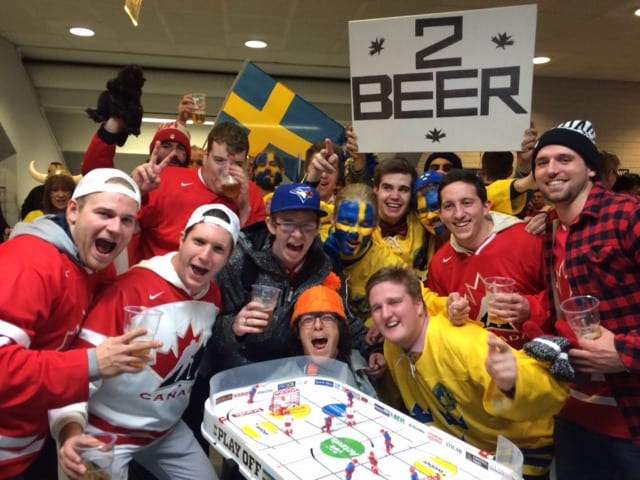 The Finnish people really made the trip a positive experience. Their openness and willingness to share their culture was the cherry on top. They wanted us to have a good time and they wanted us to be out there with them experiencing their city with everything it has to offer. We even went to a bar to watch the Canada vs. Finland quarter-final (we had tickets to the wrong stadium) and people were coming over just to sit with us, shake hands and chat. There was no animosity, despite a language barrier and an extremely close game where both teams had the leads at different points. We enjoyed the whole experience so much and now we are hoping that Vancouver gets the tournament in 2019 so we can do it again on home soil. If not, we will definitely be going back to Europe for 2020 and we hope to see you there! 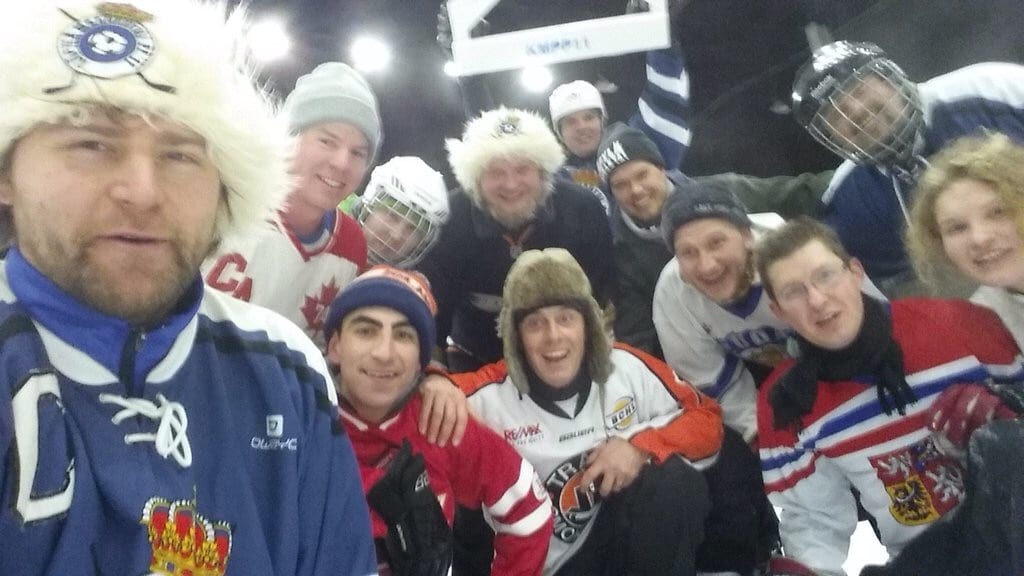 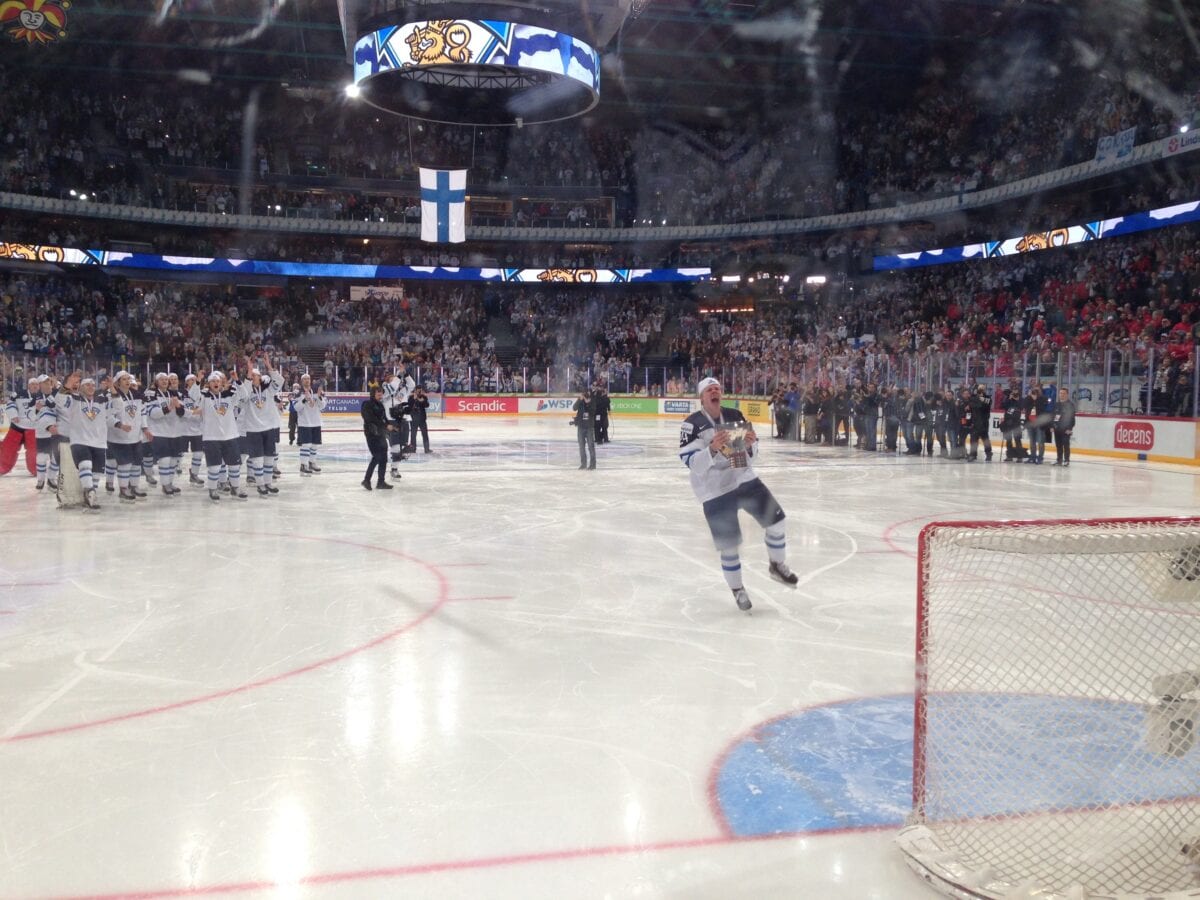 Jay Douglas Aikenhead is the Senior Manager of Digital Content of The Coaches Site. With a Bachelor's degree in Kinesiology from the University of British Columbia he has been working in youth hockey since 2003. Previously Jay was the Director of Hockey Operations for Vancouver Minor Hockey Association.