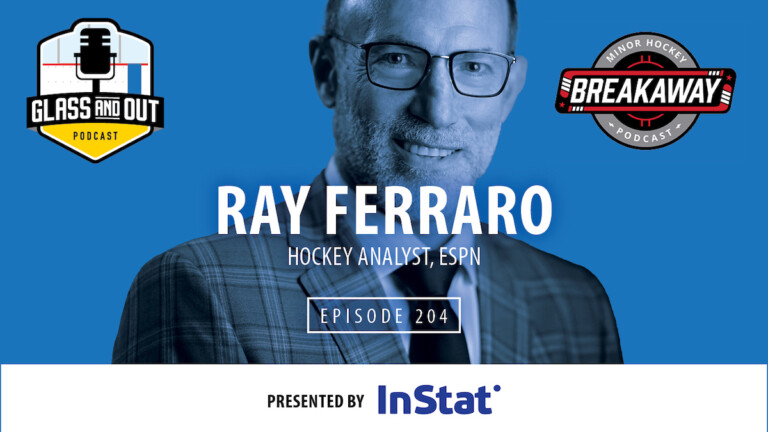 "You may not like the coach but I guarantee he or she has got good things to teach."
5
(1)

We’ve got a special edition of the Glass and Out Podcast for you this week. During the holiday break, Breakaway, the Minor Hockey Podcast, was joined by one of the most influential voices in hockey, ESPN Hockey Analyst Ray Ferraro.

In addition to his work on hockey broadcasts, Ferraro is also a sports parent, with four kids who played everything from hockey to soccer. Ferraro has seen first hand how the game and the parent-coach relationship have changed over time and he shared his coaching philosophy with Breakaway hosts Aaron Wilbur and Ian Taylor.

“My goal is to make your son or daughter better in April than they are in September. I’m not sure how many games we are going to win, but we will be competitive and we will play with the puck as much as possible,” said Ferraro. “I will try to teach as much awareness as possible, so when the puck comes to your kid, they can see what the next play is.”

He acknowledges the emotion in parents watching their kids play and understands what’s involved in the experience, wanting them to do the best they can and enjoy it. When that crosses into getting involved in coaching and undermining the coach’s message, the parent may need to take a step back.

“The parent that gets so emotionally involved that they can only see the small picture is really losing the plot. I’m not saying it’s easy because I know it’s not. Everything feels like it revolves around your child. At the end of it, if you can just take a step back after your child had a bad night, just sit down for five minutes and take stock and go ‘was that really the end of the world or was that one bad day?’”

Those were just a couple of the many gems dropped by Ferraro on how to improve today’s game. Hear this must-listen conversation on the Glass and Out Podcast!