Getting the Call by Glen Gulutzan 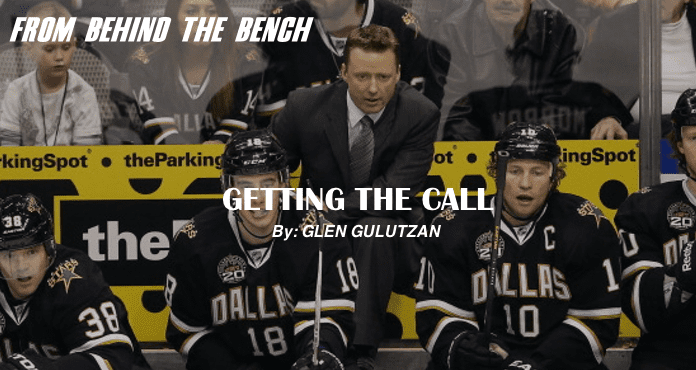 Glen Gulutzan started his coaching career with the Las Vegas Wranglers in the East Coast Hockey League in 2003 when he was 32 years old. Only eight years later, he was behind the bench as head coach of the Dallas Stars. His tenure at the helm with the Stars was over in two seasons, but a small blip in the life of a coach, and he is currently an assistant coach with the Vancouver Canucks.

Not every coach gets an opportunity in the National Hockey League. And in the case of Gulutzan, it was never a guarantee. His playing career had never extended past the Fresno Falcons of the now defunct WCHL (he did play three games with the Utah Grizzlies of the old IHL) and the list of NHL head coaches who graduate from the ECHL isn’t a long one. He had to earn his shot. The Coaches Site wanted to find out what it’s like to get that call and what you can take away from it when things change, as they tend to do for coaches. Here is what Gully had to say:

I remember the day I got the job. I had interviewed over a couple week period, first I went golfing with Joe Nieuwendyk, he was the general manager at the time, and then I went for a few formal interviews in Dallas. They told me they were going to make their decision at the end of the week.

My wife had been petitioning to get our taxes lowered, it’s something you can do in Texas. She’d put together this big presentation and went in front of the panel that Friday morning and got denied. I was driving home from the office when I got the call from Joe. He said, “Gully, I just want to let you know that we’ve made a decision and we’d like to go ahead and offer you the job in Dallas.” And of course, I was excited and thankful and all those things; we said we’d talk about a contract later.

I called my wife but when I got her on the phone, she was very upset, close to tears, and all she wanted to talk about was that she’d put in all this work and we were still going to have to pay an extra $800 in taxes that year. Finally I was able to say, “Well, I don’t know that we have to worry about all that as much in Dallas, because we’re moving. I got the job.” And then she actually cried.

The moment that it really sunk in that this was the NHL was when we were heading out for our first training camp—walking onto the tarmac and seeing the big plane sitting there. I was with my assistant coach and we had ridden the buses for 10 years. Here we were, catching a charter. We both smirked at each other a little bit and I thought, “Holy crow, we made it.”

Another memory that sticks out was something that Joe Nieuwendyk said to me. I grew up as a Montreal Canadiens fan in Saskatchewan and the first exhibition game I coached was in Montreal. As we were walking into the Molson Centre, he said, “So, how many games have you coached here before?” It was a great moment.

And then on to my first regular season game in the National Hockey League. There was a lot of buzz, it was the home opener against Chicago. I was excited and confident—we felt prepared, we’d had a great pre-season and we felt ready for the game. I remember getting the guys ready and knowing that they knew it was my first game, there was an acknowledgement there, a sort of nod to me, it seemed small but it was a big moment.

What I remember most though is that we played really hard that night and it was a really good game. The guys were amped up and we got off to a 2-0 lead. I remember being on the bench and thinking, “Wow, we’re playing the Stanley Cup champs from a couple years ago and we are playing a great game.” We won and I got this feeling like, yes, this is where I belong.

It was exciting for me because my mom and dad had flown into Dallas and a lot of family was at the game. After, I can remember my wife saying to me that when we won and the horn blasted she looked over at my dad and he had tears in his eyes. So that will always be a special moment for me.

It’s a special league, but there are pitfalls to coaching, you have to get used to moving on and if you have a family, that can be tough. My thirteen year old daughter told me at the beginning of this school year, that this is the longest she’d ever spent in one school ever. It was her third year.

So sometimes you wonder. But then you focus on the game and you see the players develop and you get some wins, and winning solidifies your confidence. That’s important for a coach. At the highest level you’re dealing with the best of the best, some of these guys are very sharp and have been coached by a lot of great minds.

It was a tough time in Dallas but the biggest thing I’ve learned is that you’ve got to just keep trying to get a little bit better; coaching is about making adjustments. It was a big adjustment for me after Dallas, coming to Vancouver. I went from going as the head guy to an assistant under John Tortorella.

It was an adjustment but it was a great adjustment—I’d never been an assistant coach and it was a really good learning experience to watch a veteran guy at work. It was a good year for me to sit back and watch somebody else do it at this level. My first year in Vancouver was a real affirming year for me as a coach, knowing that the things I had been doing in Dallas were a lot of the same things that they were doing here.

Then when Willie Desjardins came in as head coach, it was another new experience, another adjustment, because Willie had been the assistant under me in Dallas. It’s just the way it works in the coaching circles, and I have no problem working for people as good as John and Willie. The only thing I let Willie know on a daily basis is that he makes me work a lot harder than I made him work.

There’s no question that being head coach again is always somewhere in my mind. I certainly want to be a head coach again at some level, some day, but I don’t let myself start dreaming that way. My focus is to do the best I can here, in the role that I’m in. I’m a big believer that you have to be happy where you are and do the best you can at what you’re doing. After that, the opportunities take care of themselves, just like the opportunities that led me to Dallas in the first place. Those things happen when they happen but the focus is on the task at hand.

I know that if I’m working hard as a coach to develop players, then it’s going to develop me as well. Winning is the goal, but it all works together and I don’t think you can get caught up on just the winning side of it. There’s only one team that’s going to win the Stanley Cup every year but the coaches that are committed to trying to get their players better, they’ll have good teams and they’ll get to where they want to go.