Cool To Be Good by Guy Gadowsky 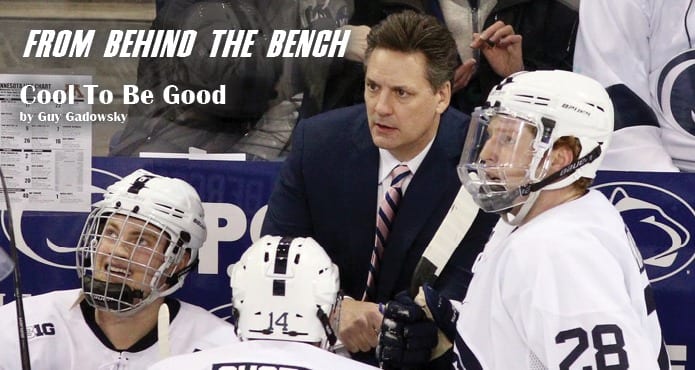 Guy Gadowsky knows what it takes to be a successful student athlete, from both sides of the bench. As a player, he spent his post-secondary years with the Division I Colorado College Tigers before moving on to his professional playing career. As a coach, he moved into the college level starting with University Alaska Fairbanks (1999-2004), before signing on with Princeton University (2004-2011) and then the Penn State Nittanny Lions, where his first task was to oversee the transition from club hockey into Division I.

When we caught up with him at the 2018 OMHA AGM for this special edition of FROM BEHIND THE BENCH, the coach shared with us how the transition for Penn State into Division I went, and why college hockey is an exciting path that can lead to great things.

My name is Guy Gadowsky and I’m the Head Coach at Penn State. I’ve been there since 2011.

Penn State happens to be sort of a combination of Fairbanks and Princeton. When I got to Fairbanks, the community really decided to get behind the hockey program. Division I hockey is one of the biggest things in Fairbanks and a lot of their identity can be around how the team does.

As the program started to do better, the attendance was amazing and the support for our student athletes and how they were recognized in their community was just awesome. There was so much pride with that program and it was so much fun.

And then Princeton is one of the highest academic institutions there is. It was really cool to see these top students balance hockey and academics, and do both at a very high level.

At Penn State, you have a sort of combination of both. Penn State is an excellent academic institution that has very serious students who want to achieve academically at the highest level, and yet the support and passion for their athletic programs is off the charts.

Cool to be good

The whole staff came over from Princeton and we knew that we were going to be Division I after one year, which was an independent year. In fact, it was supposed to be independent for two years but the Big Ten Network said, “we want you on right away.”

The transition was really fun. We had a lot of great, really high-quality guys from the club program that transferred over and they had a blast playing Division I, and we had a blast building the values of the program.

For us, we wanted the program to be built on the strong values of work ethic and commitment.

I think strong values are a part of hockey, it’s just a part of the hockey culture. I think it’s a sport that draws high quality individuals already, and then I think it’s the team aspect that [drives home] the values.

To build a team, getting the right people and the culture of the locker room are what really matters. When you get guys that are good leaders, that take academics seriously, then it’s “cool” to be a good student. That’s what’s happened at Penn State.

As a coaching staff, we all came from Princeton and saw that you can achieve all your athletic goals and be a great student so it’s something we believe in. It’s the acknowledgement and the belief that you can absolutely achieve the highest levels in both [academics and athletics] — they’re not just empty words, it’s absolutely true. At Princeton, we had a Rhodes scholar score the championship winning goal.

You have guys that are incredibly high academic performers that have a great college career and end up playing in the NHL, and then doing great things now in the NHL upper management like Kevin Westgarth (who works in the NHL league office as VP Business Development and International Affairs) and George Parros (NHL’s Head of the Department of Player Safety).

Advice for the next generation

Every generation changes a little, I hope it’s not as significant as we think. I still think hockey players are hockey players and people are people. I still think that a lot of things that were effective when I started coaching are still effective, like communicating honestly. It doesn’t matter whether it’s through text, telephone, email or one-on-one, I think honest communication never goes out of style.

To college players: soak up everything. The college experience is so valuable and, in my experience, the student athletes that don’t just come to play hockey but come to soak up the entire collegiate experience, really gain a lot from it. They’re the ones that seem to perform better both academically and athletically.

My advice for young coaches is just have fun. Everybody gets into hockey because they love it, and it’s so much fun so just don’t forget that.

From Behind the Bench Guy Gadowsky Interview NCAA Pen State