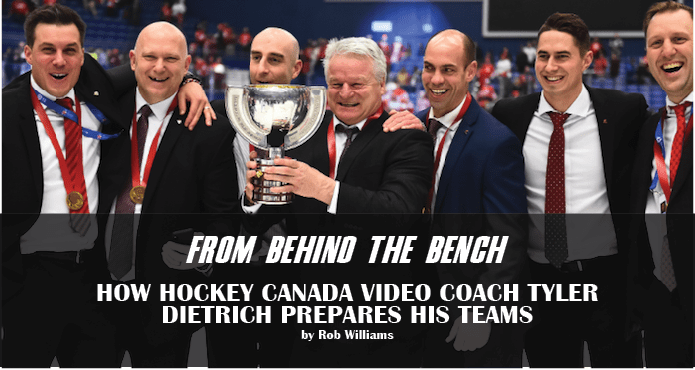 Rob Williams is the Editor in Chief of The Coaches Site. A former amateur hockey coach, he is also the Sports Editor at Daily Hive.

See All Posts By Rob

View all posts
From the pressure of an in-game coach's challenge to using analytics to prepare for tournaments.
0
(0)

Hungary isn’t a country often thought of in the hockey world, but it played an important role in Tyler Dietrich’s path to success.

Before the 35-year-old Vancouver native was hired on as a video coach with Hockey Canada in 2016, Dietrich coached a Hungarian team in an Austrian league. What he thought would be an eight-month trial turned into five years overseas, eventually leading to a job with Hockey Canada.

In a conversation with The Coaches Site, Dietrich gave us a peek behind the curtain, explaining how his work as a video coach — which includes managing the analytics department — helps Team Canada at major international tournaments.

Dietrich’s job begins well before the puck is dropped. In a country as big as Canada, video is a vital part of scouting for player evaluation, before the team is picked in the first place.

“When we’re not in tournament is often when I’m at my busiest,” he says.

Coaching staffs come and go for tournaments, but Dietrich is the constant, giving coaches the tools and information they need to succeed.

“We build out our technical plan. How we want the team to play. How we need to forecheck or play d-zone or the special teams stuff, and how that’s going to get taught. So if a coach wants to use clips from NHL teams — if they like Boston’s power play, then we’ve got to dig up some Boston power play stuff and put that into our meetings… that are shown to the players eventually.”

Once the tournament starts, Dietrich is “in the trenches with the coaches,” finding video to break down his own team and their opponents to help with making adjustments.

“Should we challenge that?”

Dietrich has a year-round job that has him working with teams at varying levels at Hockey Canada, but his in-game work comes at the men’s World Championships and the World Juniors.

It was during the 2020 World Juniors in the preliminary round against Russia that Dietrich had a difficult decision to make.

Russia scored the opening goal of the game to put them up 1-0, but there was a close play at the line on a clearance attempt. The puck exited the zone and should have been called offside.

Not only that, but the zone entry was offside too.

Yet Canada’s coaching staff didn’t challenge the play, so the goal stood.

“Russia went offside twice on the same goal. You can imagine the hole that I wanted to crawl in and hide for the rest of the tournament after that game,” Dietrich said, with brutal honesty.

“You got a couple million people watching on TSN and they get all the replays of the offside that wasn’t challenged. It can be pretty humiliating. I equate it to when you’re playing and you just have a bonehead play and the other team scores and you lose. You have that feeling, that empty feeling that you’ve messed it all up. But hey, luckily we got it back on track and won the tournament.”

While the challenge looked like the obvious decision for everyone watching at home on TSN, Dietrich’s vantage point was quite a bit different.

“At IIHF tournaments we just get the one video feed. The main program feed. So it’s a little limiting in that regard. And it’s a little bit grainy and small and can blur at times.”

Communicating with the coaching staff via a headset, the pressure is on.

“I’m looking at that thinking ‘the puck might have come out here.’ But I don’t know. With the delay on your screen and the time crunch you’re under, you’ve got like 20 seconds to make this decision. So the bench is asking ‘should we challenge that?’ If you challenge an offside and you’re incorrect, you’re shorthanded for two minutes. So I said to the bench, ‘I’m not comfortable telling you guys to challenge this, it’s too close for me to see.'”

After the puck had been dropped for the centre ice faceoff, Dietrich had time to look at the initial zone entry. That’s when he knew he missed something.

“I go ‘wait a sec, if that puck didn’t come out, the prior entry would be the one in question.’ So I went back to the prior entry and it was a foot and a half offside. It was black and white, blatantly offside. But… you only have a limited amount of time, you have to make a decision. You don’t have all the resources that might be available in an NHL building.”

In fairness to Dietrich, the TSN broadcast didn’t point out the zone entry being offside until the intermission.

“Like any position in hockey, I think video coaches have pressure and they put pressure on themselves. And it’s fun, that’s what sports is, that’s why we’re involved in it. But it can be a really demanding position in terms of just those little tiny things that sometimes can have a drastic effect on the outcome of the performance.”

The unchallenged goal was the first bump in the road of Canada’s worst-ever defeat at the World Juniors — a 6-0 loss. But this story has a happy ending, as Canada beat that same Russian team in the gold medal game eight days later.

“It’s a real team game and everybody was good about it… But that’s one area that you can be left looking like a fool and feel pretty bad about yourself.”

The role of analytics

As technology has improved, the role of the video coach has expanded.

“Teams more so now than ever are reliant on that information for their success. Because if they’re dropping the ball — if they’re not digging in on their opponent or looking for subtle ways to improve their own team — chances are everyone else they’re playing against is.”

The use of analytics have been on the rise in hockey over the past decade, and that’s true too with the national program.

While Dietrich admits tracking junior hockey hockey is tricky because of the lack of available data, he says Hockey Canada wants to “make sure there’s no stone unturned.”

“Data sometimes, a lot of it can be noise. So it’s definitely a challenge to filter through that and understand what components are relevant to on-ice success.”

The way coaches utilize analytics varies greatly, Dietrich says. Different coaches are used to different processes — ones that made them successful enough to get the call to represent their country.

The key for buy in, Dietrich says, is asking the right questions.

“The buy-in varies and people in the industry, they’ve got their own tools with their club teams or what they’re used to, so sometimes they want to stick to that. Change can disrupt things often.”

“Some coaches don’t need to see anything. Other coaches get a million numbers, what they decide to use from that might vary.”

No other country demands excellence like Canada, and it’s up to Dietrich to put the coaching staff in the best possible position to succeed. But he wouldn’t have it any other way — particularly when the tournament concludes with a gold medal around his neck.

“It is a challenging job but it’s such a rewarding job.”