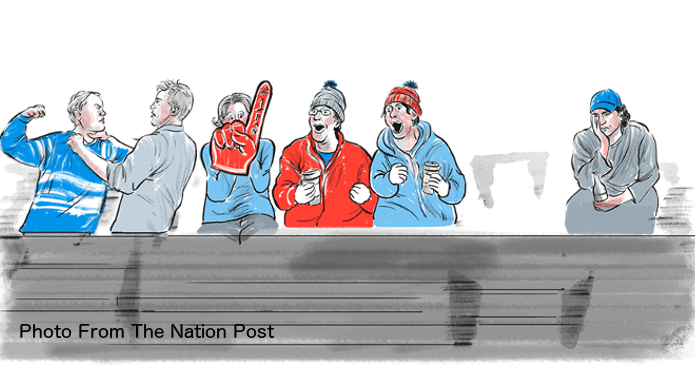 Awhile back I was explaining my life to someone I’d just met. In addition to writing about hockey for a living, I mentioned I coached it as well.

“So you must really love it then, eh?”

As I nodded in approval at the typically Canadian question, doubt creeped into my head.

I took a sip of my Double Double*.

It’s In Our Blood

We underestimate how much hunger plays a part in our daily lives. Hunger is the reason we believe the grass is always greener on the other side, in another job, at another club, with another team.

Unless the actual grass is green and we’re watching it grow for hours on end before the hockey season begins. It’s the middle of the summer and you’re probably wasting time at work reading articles like this one on the good ol’ coaches’ site, undeniably because you can’t wait for hockey season either.

…probably, I don’t know, I slept through economics class in high school because my midget hockey team practiced until midnight.

Brief semi-related rant: These days we take the game so seriously that lots of players leave school in the afternoon to practice. Well, three guys from that late-night practicing midget team played in the NHL, so I guess if you’re really dedicated it doesn’t matter when practice is, you’ll make it work.

Anyways, later on when I started working in hockey, I was fortunate to be surrounded with wickedly intelligent mentors whose passion for the game was the only metric that outweighed their ability to coach it. They loved it. They loved being part of a growing movement of professional young coaches hellbent on affecting real positive change.

I learned to take hockey as seriously as I do because it was fun to take it so seriously.

Hockey Will Always Give Back What You Put In

Now, there’s some perspective to be gained here. I enjoy coaching. I refuse to be part of a team that isn’t fun. Fun practices, fun atmosphere, fun, fun, fun.

Competing is fun. Arguing for your opinion is fun. Ripping pucks is fun. Screaming at the referees is fun (there you go zebras, now you know, we actually get a rush out of it).

The more seriously you take hockey, the better you position yourself to reap the rewards of the game. Preparing more than the next guy will give you an edge. Learning more now will give you more ammo later.

That’s the perspective of a coach. What about hockey’s other two key individuals?

No matter what level you play at, there are other players depending on you. if you don’t show up to your initiation practice, it’s not as detrimental as, say, not showing up for a game in the NBA finals, but it still impacts the group.

It’s up to individual players and not their parents to determine how seriously they’re going to take the game. A lot of this hinges on how much they enjoy playing and practicing (which brings us back to the coach’s responsibilities), but hockey is a sport that both requires and teaches commitment to something greater than the individual.

If you’re taking the game more seriously than your child, then you’re gonna have a bad time. It just doesn’t work. We’ve all seen it. We’ve all accused someone else of being that parent, even though you’ve caught yourself lying awake at night worrying about your son or daughter’s hockey career while that son or daughter sleeps like a rock in the room next door.

The right course of action for a parent is to support, encourage, and guide their child through their turbulent commitment to hockey. Push, don’t pull.

Hockey is a serious game, so yeah, I do love it.

But I’m sure enjoying this break right now, too.

*I wasn’t actually drinking a double double, but I couldn’t resist the pull of Canadiana.