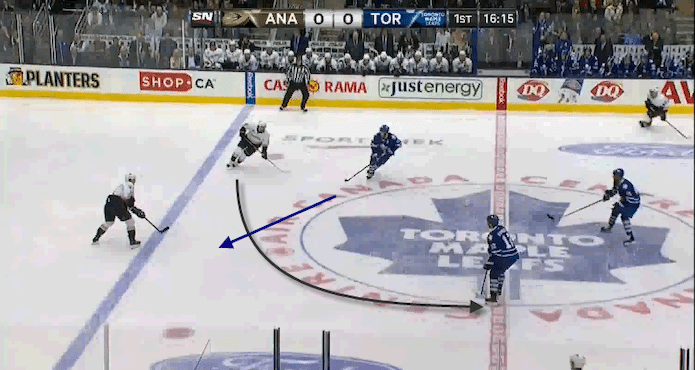 It’s important for a player’s development to incorporate tactics during games that support playing with speed and physicality in all three zones. For a player to improve offensive skills they must have the opportunity to play with the puck more than without the puck.

And the most fun place to play is the offensive zone. So how do we get there?

One of the best things we can do to support the development of a player’s offensive skills is to teach them how to pressure up and check properly in one on one situations and as a member of a group in puck battle situations and when forechecking. The start of a good offensive play is a good defensive play. Teams that play fast support the puck in all three zones to win the puck possession and control game. Teams forecheck in the offensive zone with structure and tactical thought but there seems to be an absence of this tactical thought and structural play in the neutral zone.

I am not a fan of systems or set plays. I equate a five player unit supporting the puck defensively in the neutral zone as a group tactic that requires thoughtful design and execution.

A neutral zone forecheck to support the puck defensively as a group based on strategy and tactical play for me is part of hockey fundamentals. We’ve lost possession of the puck and we want to get it back by working as a group to regain possession and control.

Whatever tactical structure you deploy to forecheck in the neutral zone to corral the opponent into an area to create a puck turnover should be based on the situation. Whether as a group you play a one-two-two or a two-one-two, alternating or another structure it should be based on situational hockey. What matters is the players know they have to work together as a group to regain puck possession and control and create scoring opportunities off the counter attack game. The players should also know when to use the best structure for the situation.

How do they know this? That’s your job, coach.

Players get better offensively as individuals and as a team when they play with the puck more than without the puck. When your players play more in the offensive zone than the defensive zone you are likely winning more hockey games than you’re losing and your players are happy they’re playing with the puck and being chased rather than doing the chasing.

Focus on defending the neutral zone with speed and physicality and win the puck possession and control game.