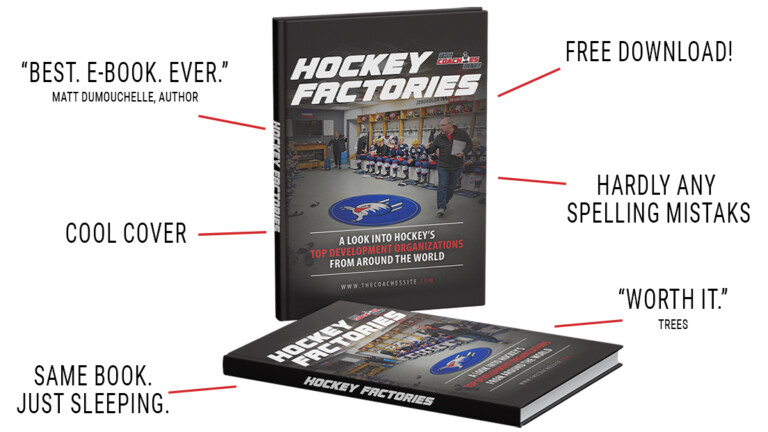 Okay there really isn’t a story behind the Hockey Factories E-Book, but I couldn’t resist that title.

Hockey Factories as a series, however, does have a cool backstory.

So there’s this guy named Matt Dumouchelle and he’s the Assistant GM with the Leamington Flyers of the Greater Ontario Junior Hockey League. Last year he approached The Coaches Site about writing some in-depth stories on what he considered the best hockey organizations in the world. TCS Founder Aaron Wilbur was all over it; I admittedly, wasn’t sure such long form content would fly on our site. And could Dumouchelle even write? Who is this guy?! These are thorough, meaty stories he’s proposing to write after all and many people can barely finish a sentenc…what was I saying? Ah whatever. We gave it a shot and of course Hockey Factories is a massive success, so much so that it now has its own podcast and the first story of Season 2, Hockey Factories: The story behind EV Zug, was just released.

Not only can Dumouchelle write, he can write real good like.

For those unfamiliar with the series, Hockey Factories is a unique look behind the curtain of some of the globe’s top hockey development programs. The series allows hockey fans to step into the rooms where Sidney Crosby, Leon Draisaitl, Rasmus Dahlin and hundreds of others who got their starts and developed into some of the brightest stars in the NHL.

The series dives into how these programs set their players up for success throughout their development, what coaching strategies they use to get the best out of their kids and how they work on not just creating great players, but also great people. The first series traveled to Minnesota, British Columbia, Germany, Finland and Sweden to see how these programs are doing it right, and what you can take to your program to create your own Hockey Factory.

In conclusion, they’re great stories, written by an awesome author, edited adequately by yours truly, and each piece and podcast has something unique to take away.

Do yourself a favour and DOWNLOAD THE HOCKEY FACTORIES E-BOOK!

Sorry for shouting, we’re all still really excited about this.