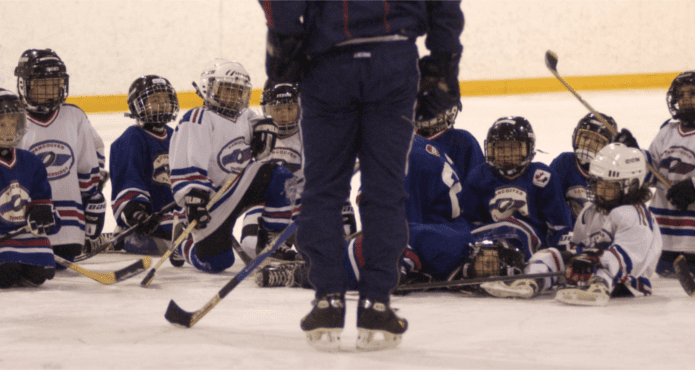 Shackles has been described as the “heart and soul” of the Richmond hockey. A long time minor hockey executive and visionary who is passionate about promoting the core values of sport. He continually challenges himself and others around him to make the game better. To Shackles, winning and losing isn’t nearly isn’t nearly as important as ensuring players are afforded an environment that first and foremost emphasizes the love of the game.

View all posts
0
(0)
Is it the guy who sits in a bar yelling at the players zipping across the enormous tv screen? Yelling at them to ‘hit ’em’ or ‘shoot’ or ‘move the *&*#$* puck!’. Or is a ‘hockey guy’ the guy who can tell you who the Canucks drafted first in ‘76 (trick question, first pick that year was Bob Manno….in the second round). Is it a guy who can tell you who Sheldon Kannegiesser is? Or Mark Wotten, Daryl Stanley and Claire Alexander? Or is it a guy who knows the inner workings of Hockey Canada or BC Hockey? Is it a guy who wistfully remembers the joy of seeing Punch Mclean tossing a garbage can onto the ice at Queens Park Arena? Maybe it’s a guy who has always played hockey at the amateur level for decades and knows pretty much everyone still from the ‘old days’. Or maybe it’s just a guy who follows the endless panel discussions on the endless hockey broadcasts featuring the endless drivel from the seemingly endless supply of commentators spouting the endless raked over coals masquerading as insight and pearls of wisdom.

So, what exactly is a ‘hockey guy’?

Is it a put down as in when you don’t like your kids coach you can pull out your favourite arrow from its quiver and declare him to be ‘not a hockey guy’ because he had the temerity to line your kid up on the wing (or, God forbid, defence) instead of his birthright centre position? Is it a mark of commendation as when you are trying to convince your wife that the $3000.00 you are spending for the ten week spring season is worth it because the coach is ‘a hockey guy’ (it says so right on his jacket, right below the AAA spelled out in enormous block letters………letters that you are paying a thousand bucks a piece for).
Does the ‘hockey guy’ as an animal really exists or does it occupy the same territory as Bigfoot? Which means only sighted by believers and those with a dispensation to want to believe in big hairy beasts who come out to scrounge for discarded food or work on the power play.

I’ve often wondered what a hockey guy is because I’ve seen so many types of people in minor hockey and all would, one assumes, think of a ‘hockey guy’ as the epitome of who you want your kids to be around. And I get that. I just don’t know what a ‘hockey guy’ is. I’ve seen people with far, far more knowledge of the actual sport and the intricacies of it walk the hallways of the Ice Centre. But it didn’t necessarily mean they were good coaches. The people that are good coaches, whether they have a hockey background or not, usually are good coaches because they are, at the heart of it all, just good people. Period. The sport itself is not that complicated. The is only so much that can happen in a small space with the trajectories preordained based on the physics of skating and movement. And I think what you see on a nightly basis now in the NHL is a sport that has no creativity in it anymore because there is no more room for that. The sport has been figured out and analyzed from every angle. It has been studied and coached to death at every level to the point where games are decided not so much by skill or happenstance anymore but by the vagaries of video reviews and the degree in which officials, and their NHL- mandated ever changing view of calls, have more impact on the games because everything else is a stalemate.
Which leads me back to coaches and ‘hockey guys’. I want your kids to have coaches who are well rounded. Coaches who know the game are a bonus but at a minimum I would like to provide coaches that come from a bigger viewpoint than just hockey. Perhaps other sports or other endeavours. All these things are routinely mixed in the blender and it’s what constitutes the best coaches. Those that care about your kids, those that lead by example, those that teach and mentor, those that create opportunities for growth on and off the ice and those that value the role they have to play in their players lives. Those are the real ‘hockey guys’ and they may never watch the NHL, skate regularly themselves or have even played the game. Or they might have done all of that.
But the real ‘hockey guys’ are the men and women who understand that chasing the black disk around the ice, as much as we want to ascribe to that pursuit a complexity it begs to have, is really about being able to spend time with kids and having that time spent translate into them becoming better people. Better players yes, but more than anything, better people.
If you liked this article checkout Nigel’s last post here.