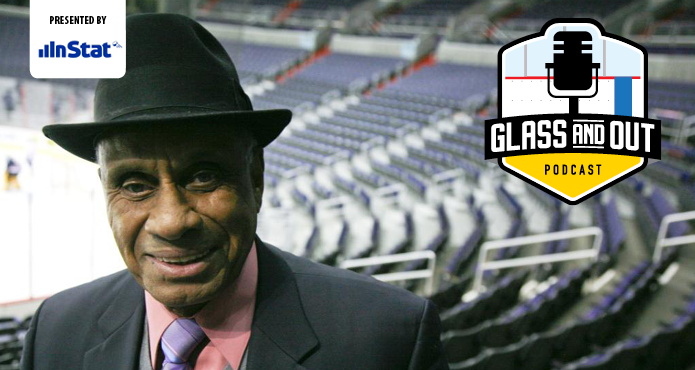 In honour of Black History Month, we’re revisiting one of our favourite episodes in Glass and Out history, featuring the legendary Willie O’Ree.

Back in 2018, host Aaron Wilbur and former co-host Kelvin Cech were lucky enough to be joined by O’Ree for an in-person interview as he shared some incredible stories about his journey to the NHL, the many challenges he faced along the way, how he feels about the current state of hockey, and what can be done to create a more diverse game.

Along with being the first Black player in NHL history, O’Ree was inducted into the Hockey Hall of Fame in 2018 in the builder category for all the work he’s done on creating a more inclusive game. Also in 2018, the NHL instituted the annual Willie O’Ree Community Hero Award in his honour, to “recognize the individual who has worked to make a positive impact on his or her community, culture or society to make people better through hockey.”

In addition, we were joined by the first woman President of the NHL Coaches’ Association, Lindsay Artkin.

Under Artkin’s leadership, the NHLCA has been incredibly proactive in playing a role in creating a more inclusive hockey culture and in providing women and non-white coaches an equal opportunity to pursue a career in hockey. These initiatives include the Female Coaches Development Program and BIPOC Program.

Listen in as we revisit a conversation with one of the legends of the game and a woman who is leading the charge in creating a more inclusive game.