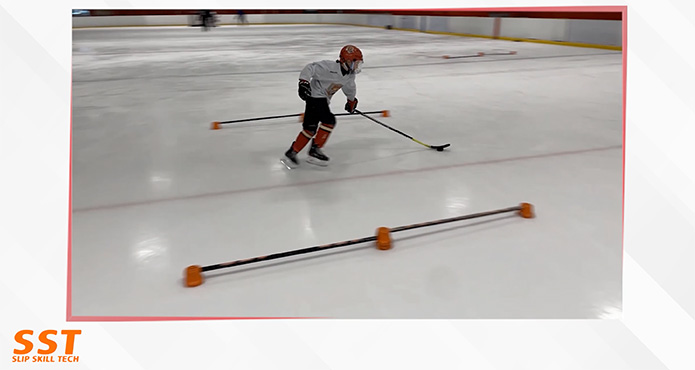 In 2020, the hockey market was introduced to Slip Skill Tech (SST), a company that creates a high-quality, effective hockey training tool developed by founders Jaroslav “Yogi” Svejkovsky and Kris Beech.

Svejkovsky, who has gone by “Yogi” since his days in junior hockey, was drafted in the 1st round, 17th overall, by the Washington Capitals in 1996. The now 45-year-old from Czech Republic played 113 NHL games before he was forced to retire because of concussions.

Beech, now 40, was also drafted in the 1st round, 7th overall, by the Washington Capitals, in 1999. He enjoyed a 15-year professional hockey career, featuring 198 NHL games, before retiring.

They’re both very familiar with skills training tools and saw an opportunity to develop something different. Something unique. Something better. No gimmicks, just a tool for game-like thinking, foot, and hand-speed that will set players apart from the rest. Watch the video above to see it in action.

The patented length of their SST facilitates the appropriate space and timing to work realistic deceleration, deception and acceleration out of the drill pattern. The SST Fast Mag System makes it the quickest and easiest training aid to carry, set up, clean up and store on the market, and it can be used by every skill level both on and off the ice.

“It’s a great tool for coaches to create a repetition of game-like skills, to help them create more plays on the ice,” said Svejkovsky. “It’s been created for anybody, amateur players, minor players, and at the same time it can be used by junior players, NCAA players and at the pro level.”

Start out with their full off-ice stickhandling curriculum and explore the limitless creativity possible with drill pattern setups. The best part of all is that it is a blast to use!

Want to give Slip Skill Tech products a try? Click here and use the promo code TCS15 to get 15% off every purchase!