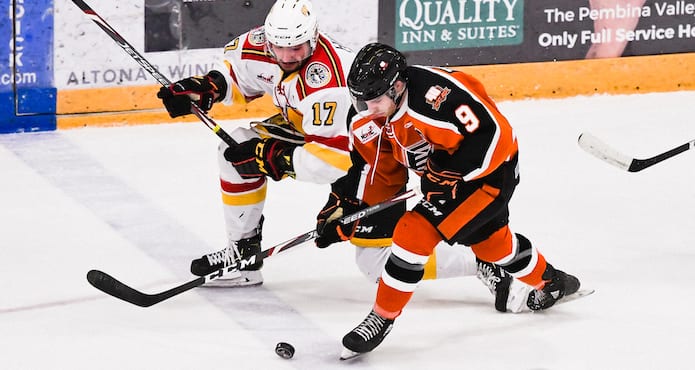 Alright, now that we can agree on something, let’s dig into tactics that will help us score goals more often.

There’s plenty of ways we can go with this, so it’s important to agree on something else: every team is different, and what works for your team might not work with my team, the Winkler Flyers. For my next series of posts I chose tactics that are fairly universal, however, to reach the widest audience.

The clips you’ll see represent a significant sample of the tactics we used to create offence last year. Certain things, like whether or not we’d focus on D to D passes instead of high cycles with the D were dependant on what our opponents were doing in the defensive zone, but for the most part, our tactics in the offensive zone were based on our strengths, not our opponent’s.

So with that in mind, let’s dive in. Hands up if you’re a fan of coaches screaming at their players to GET IT DEEP. Dump it in, pucks deep — the game is moving away from dump and chase hockey, right? Has been for years. Alright, we agree on one thing.

So wait — maybe we should be dumping the puck in? Surely it’s better to carry the puck over the blue line with possession? I’ve seen a lot of work done lately suggesting entry with possession is the only way you can enter the zone, and it’s just not true.

Zone entry against a tight gap 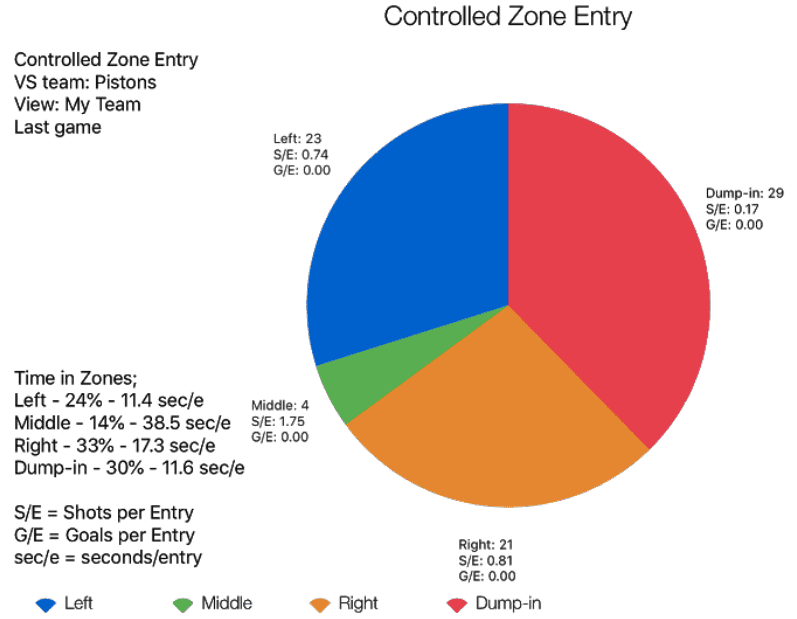 This is a fairly typical report of our zone entries against a very good team, and we can learn a couple things from it:

Each of those points carries its own series of questions, but who cares, just carry the puck into the zone then! This is easy, right?! The problem is your opponent doesn’t want you to carry the puck in, and the best defensive teams in your league, such as the Pistons in our league, will confront the puck carrier at the blue line and force you to dump it in, especially inside the dots.

Sure, we spent almost 40 seconds in the offensive zone when we carried the puck in through the middle, but we only did it four times. You have to give credit to the opponent sometimes. We still had success entering the zone from the wall, but you need a strategy if you have to dump the puck in.

So let’s start with one of my favourites.

The first key is that we’re carrying the puck through the neutral zone with speed. The Selkirk defender has a good gap, so what is our puck carrier supposed to do? Try to cut to cut inside the dots? Nope, then we’re offside and we have to turn back anyways.

Let’s go north, let’s put the puck into good space and see what happens. Jackson Arpin soft chips past the defender, and 16-year-old Grady Lane attacks with speed and turns up. Everyone is on the same page because we work on delays in practice constantly. Grady finds Drake Burgin because a Selkirk player over-backchecks, and now we’ve got loose bodies because we’ve created confusion. And who scores? The other defenceman, Kyle Lamoureux.

Now if that’s not fun hockey I don’t know what is.

Alright, what if you don’t have to dump the puck and you can carry it in with possession?