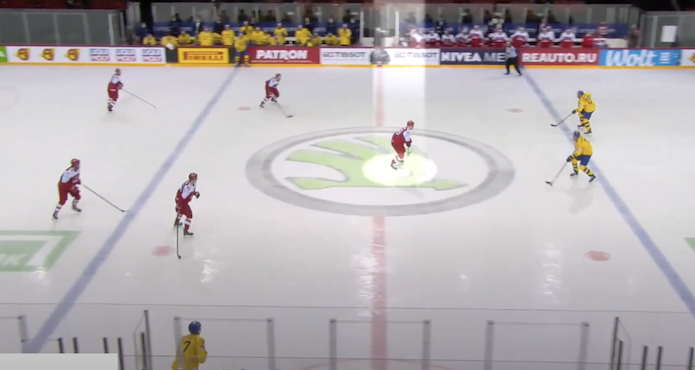 They used a number of interesting neutral zone forechecks.
5
(4)

Every year it seems the like IIHF World Championships creep up on me, but after the first day, I am glued to my TV and watch all the games.

This year, the World Championships had a lot of surprises. One thing that I noticed throughout the tournament was Team Denmark and the way they were defended through the neutral zone. They used a number of interesting neutral zone forechecks, so let’s take a look at some of them.

There’s nothing more important than not giving up an odd-man rush, but the 3-2 allows your team to be back, to get back and to stay back. All five players are skating backwards. The first line of pressure is created by the forwards, and the back row is made up of both defencemen.

Both defenceman hold the blue line while the middle forward applies pressure on the puck carrier forcing them to take one side. There are not a lot of options to beat the 3-2. It often forces a lot of dump and chases and hunting the puck below the goal line.

For a lot of coaches, the first time they have seen the 1-3-1 was when Tampa Bay played against the Flyers… and we all know how that turned out.

With the 1-3-1, the biggest question is, where do you send your defenceman? Keep them in the middle, bench side, weak side? Denmark usually kept their defenceman in the middle of the ice, and I don’t mind that option. Usually, forwards will be more aggressive and will turn their hips quicker to attack the puck carrier. But sometimes, having a forward on the side can cost you some odd-man rushes because of their aggressiveness and/or lack of experience playing as a defenceman. The D in the back supports puck side and races to be first on the puck on a dump in.

They used a number of interesting neutral zone forechecks . . .