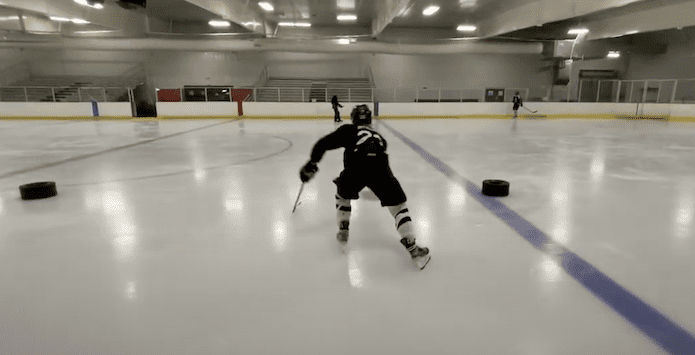 Let‘s go on a journey together.

Recently I have begun working with a new student. His father contacted me about doing a private lesson, specifically around skating. His message said that his son needed work on speed and quick turns.

I’ve known about this player from a distance for a while now. His personal trainer’s gym is at our local rink and he kept telling me about this player as an athlete. He had terrific strength and speed numbers. So between his father’s message and my knowledge from the trainer I know that there was only one reason for wanting more speed and agility on the ice… technique. Specifically, weight transfers.

These videos were sent to me before our first lesson.

At this point I am noticing three key items:

From here my thought process is to work on foundational elements that run through all elements of good skating. These are the key elements that’ll make big differences for him. Hopefully some smaller details will iron themselves out along the journey. Two keys were isolated:

At this point I had my plan in mind. Utilizing drills/exercises that required those two elements and rotating between the two frequently to keep him engaged the entire hour long session.

Arriving at the rink

After the normal small talk occurred and once the father walked away, I asked what he personally wanted to work on and what he felt he could use some improvement on. He wanted to work on backwards skating and getting more speed. I agreed those were valuable and talked about breaking those down into little pieces we can focus on.

Next, my goal was to get across how to learn. It was also important that I stressed to him the importance of being able to feel through the reps rather than talking himself through them. The way I explained to him is that we will get to a point where he would be closing his eyes and skating through the exercises.

Coach notes: It’s vital to gain insight into the understanding of the player and meeting them where they are. They are the ones who are making the skill their own and branching from where their game currently is.

I pulled out my iPad and recorded three basic movements: forward stride, turns, and transitions. I don’t show the video yet, but rather focus on simple exercises/drills. I’ll pull up the video later to compare to current form. Showing tangible evidence of improvement is great in building confidence within the player and quickly improve rapport between yourself and the player.

First thing I want to focus on is his forward stride. The baseline you can notice a wide base that ‘train tracks’ on his inside edges.

On our first exercise I simply told him that we wanted to work on a better glide and he is to take strides while gliding as straight as possible. We use the blue line as a visual guide. He went across and back twice before I asked him how he felt. He mentioned that it was tougher than he thought. We did that a few more times at various speeds and lastly, with his eyes closed. Here is the end result toward the end of day 1:

Coach note: Great improvement and his leg is coming back underneath him each stride. In my mind I’m thinking, “perfect.” I’m very happy he is talking about how it feels and he can notice the difference. We couldn’t have asked for a better start.

Next we worked on turning. The baseline backs up what we saw in the pre-lesson clips — outside leg holds majority of his weight and very stiff/straight with little to no push with his inside leg.

I told him to solely focus on feeling all of his weight on his inside leg. After a few reps this is what it looked like: