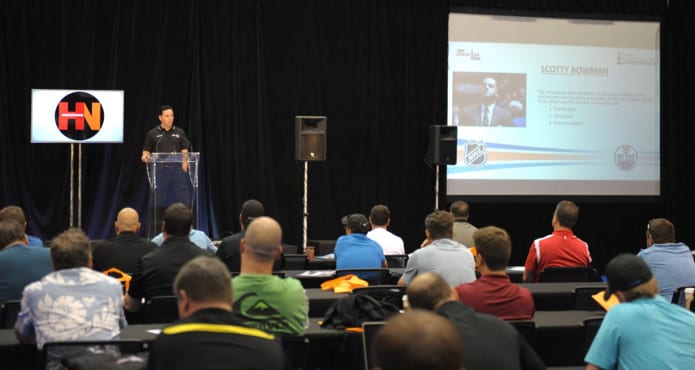 When The Coaches Site was founded it was with the goal of sharing the experience and knowledge of professional coaches with the greater coaching fraternity.

But where do professional coaches go to learn and pick up new ideas?

In the case of Edmonton Oilers assistant coach Jay Woodcroft, he turned to some of the game’s elite players and coaches. Jay is unique in that he transitioned directly into an assistant coaching role with the Detroit Red Wings following a minor league playing career and four years at the University of Alabama Huntsville. Usually coaches who haven’t played in the NHL have to cut their teeth in junior ranks and work their way up through the ranks.

That he arrived in the NHL with little coaching experience and has been employed as an assistant coach since the 2005-2006 season (Detroit 2005-2008, San Jose 2008-2015, Edmonton 2015-present), likely has a lot to do with his passion for the game. He wears his heart on his sleeve when it comes to coaching.

In those 11 years since he broke into the NHL Jay has been fortunate to win three Presidents’ Trophies, a Stanley Cup and a Gold Medal at the World Ice Hockey Championships.

Several years ago, while with the San Jose Sharks, Jay started taking fellow coach and Hall of Famer Larry Robinson out for breakfast on the road to pick his brain on what makes elite players tick. It opened his eyes.

How do players think?

Since then he has reached out to other current and future Hall of Fame players and coaches such as Rob Blake, Brendan Shanahan, Pavel Datsyuk, Joe Pavelski, Scotty Bowman to name a few to get their take on what should be expected from coaches.

What he learned came straight from the horse’s mouth and can’t be found in a coaching manual. But it can be found HERE.

Two character traits really stood out amongst all of the people he interviewed:

Below is an excerpt from Jay’s presentation this past summer at our inaugural TeamSnap Hockey Coaches Conference in Toronto.