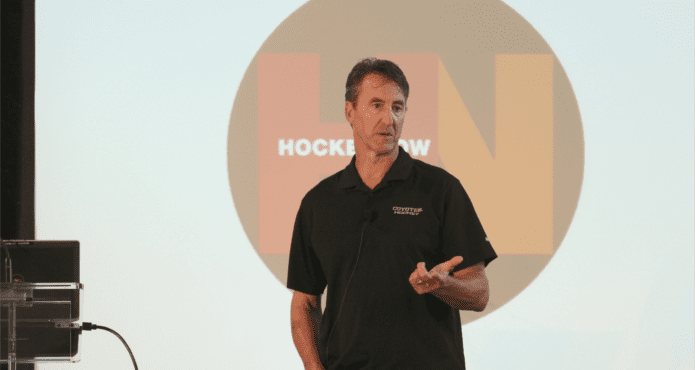 Jim Playfair speaking at our Hockey Coaches Conference in 2016.

Perhaps no position in hockey is more underserved than the defensemen. It seems every team (from the NHL down to most Atom teams) has a dedicated goalie coach and coaches, as a whole, are confident working with their forwards. But rarely do you go watch a minor hockey practice and see a coach working strictly with the defensemen. Unless you have first hand experience playing the position, most coaches wouldn’t know where to start.

That’s likely why at the junior level and in pro hockey, serviceable defensemen are tough to find. The most skilled players generally gravitate towards playing forward (where they can pick up points) at a young age and those that choose to play defense don’t normally receive the same development opportunities.

So with that in mind, we asked one of the most respected coaches with a background in developing defensemen to speak at our TeamSnap Hockey Coaches Conference this past summer in Vancouver.

Arizona Coyotes associate coach Jim Playfair is a former 1st round pick of the Edmonton Oilers (1982) and would go on to play a handful of games with the Oilers and Chicago Blackhawks. He began his coaching career in the ECHL with the Dayton Bombers before graduating to the Saint John Flames (Calgary Flames affiliate) of the AHL. In his first season in Saint John, Jim would lead the Flames to a Calder Cup Championship.

He would eventually graduate to the Calgary Flames as an assistant coach and was named the club’s head coach for the 2006-07 season. Under Playfair, the Flames finished with a record of 43–29-10 and advanced to the NHL playoffs.

In 2011 he was hired by the Arizona Coyotes and has been mentoring a young and promising D-corp, that includes Oliver Ekman-Larsson, Connor Murphy and Michael Stone.

Jim was an open book in terms of sharing how he coaches the D in Arizona. He shared the language they use, points of focus for the defensemen, both on offence and defensively and some great tips on how to use markers on the ice to mange time and space.

It was one of the more technical presentations we had this summer. Below are some pointers he passed on that will help defensemen of any age generate more offence from the point…

Check out this excerpt from Jim’s presentation. It’s sure to become your blue print in how you approach coaching your defensemen.

Of course if you enjoy what you hear, consider signing up for a FREE 30 day trial on our TCS | MEMBERS site for access to our entire library of videos from our annual TeamSnap Hockey Coaches Conference.