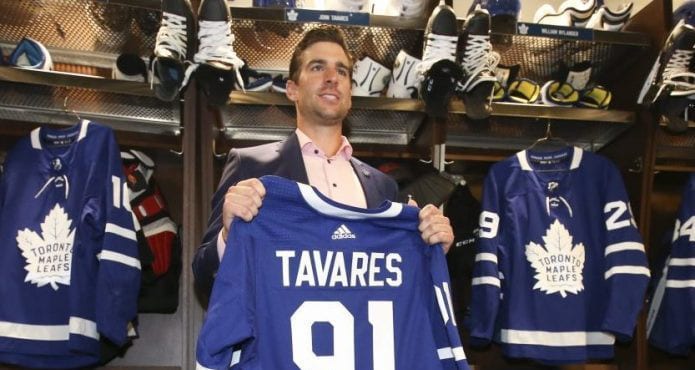 Last weekend some team from the NHL’s eastern conference added some guy from a team in New York. The Islanders I believe? You may have heard about it. John Tavares has been a steady superstar on the island since he was drafted in 2009. He seemingly singlehandedly willed the Islanders back into the playoffs after a few lean years, even leading them to a series win over the Florida Panthers in 2016. Amid turmoil off the ice in New York, Tavares went to work every day, whether that happened to be at Nassau Coliseum or in Brooklyn, and led by example.

And now he’s gone. The Toronto Maple Leafs are adding a player who bled blue and orange for nearly a decade. And now, as it was when Tavares was just a youngster wearing Maple Leafs pyjamas, he’ll once again bleed only blue.

For most observers, we can only assume the Maple Leafs are getting a strong, motivated hockey player on the ice – and a positive role model n the dressing room. After all, Tavares instantly becomes the go-to cagey veteran superstar in a room driven by Auston Mathews, William Nylander, and the 13 year-old Mitch Marner. Patrick Marleau will help, too.

But this is the most extreme example of a high profile player being added to a new dressing room, if only because it’s framed by the size of the contract. That said, hockey teams all over the world are currently in the process of adding new personalities to their teams through drafts, trades, and recruitment.

And it’s not easy. We talked to the EIHL’s Cardiff Devils Head Coach Andrew Lord on the Glass & Out Podcast a couple weeks back about how important the recruitment process is for pro hockey teams in Europe. One of his guidelines is to keep his team intact from day one through the end of the season. No trades, no releases – that’s attractive for players entering the pro world – here’s where you’ll play for the entire season. After that, it’s up to the player to hold up their end of the bargain. With a productive season maybe that means the ability to sign a bigger deal elsewhere, a reality no coach or general manager in their right mind would hold against the player. The Toronto Maple Leafs have the luxury of leveraging every resource money can buy to determine the character of John Tavares. So do the Dallas Stars and the Tampa Bay Lightning in their pursuit of Erik Karlsson. Ditto for the Florida Panthers, who recently acquired Mike Hoffman and the alleged controversy surrounding his fiancé.

In college hockey, as many of you know, making a bet on a player you’re going to spend every day with for the next four or five years is an important decision. You have to have the foresight to predict the challenges those players will have on the ice and in the classroom, plus the reality of moving from a billet house where every meal is provided and laundry is folded and waiting every day to living with teammates whose culinary expertise amounts to extra cheese in the macaroni and cheese.

It’s these challenges, not the easy successes, that determine the worth of the players already in your dressing room. Who’s going to help Mike Hoffman’s family acclimatize to south Florida? Who’s going to show up to John Tavares’ house with a 6 pack when the media pressure in the Big Smoke after a three game losing streak raises to a fever pitch? And who’s going to teach your new recruit the wonders of black beans, quinoa, and pre-cooked half chickens?

So let’s reframe the task at hand. The players you already have in your dressing room – they’re not going anywhere. Those decisions have already been made. But the new players coming in – the new people – are they the type of people who, down the road, will be able to offer the same support you’re hoping they’re about to receive?

Because if you can answer that question with a resounding yes, then you’re on the right track.