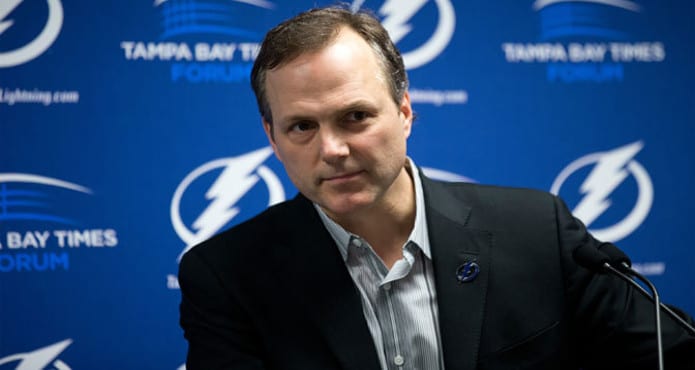 Jon Cooper will be at the bench as the coach of the NHL for the Game 1 Eastern Conference first round series against the Detroit Red Wings at the Amalie arena. The game could start off a successful and long campaign for the lightning and more credit to the new coach if it turns out to be a good season.

A background check on the new coach’s life proves that he is one who has seen a lot of journeys and how some could come with success that was otherwise unexpected. He has gone from being a hockey player in his high school in Saskatchewan to a lacrosse player in his college life at Hofstra University. He later joined wall street and later joined Thomas M. Cooley Law School in Michigan for a degree in Law. He practiced law as a lansing public defender. He however never lost track of his hockey days as he played hockey on a team made of local lawyers. Through this he met a judge whose son was a goalie for a local high school team which fortunately for him needed a coach. He led the Lansing Catholics to a regional title. It was a major challenge for him that he wanted to accomplish as he was able to gather a team and know weaknesses of each player knowing where each one of them would play best. In an interview before signing in as the new coach for the Lightning he said “I didn’t get into coaching to coach in the NHL, I got into coaching because I loved it. I enjoyed that you get to assemble a team, and you’ve got one season to win a championship. I just loved that challenge.”

The style that Cooper uses to coach any time that he has been in is superbly unique. He ranks as team player who knows how to interact with his players very well and talks to them personally. Getting to know his players background bringing in friendship within the team.

He has not practiced law since 2003 but uses the tactics he used in the court room to make decisions and come up with the best strategies that could make the best of the team. He has gained respect from all his players who say that he is very smart and is a mix of everything. That coach that can push you to do more for the team, using video sessions and asking for opinions from all his staff and players before stating his case and making conclusive decisions.”He’s very good with his words and he’s very good at convincing you,”said one of his former players who is a forward at the Ottawa Senators.

His previous endeavors was coaching the Texarkana giants in the North American Hockey League and this has been reviewed as a person who has love for the game. Cooper led the Texarkana to a victory in the North American Hockey League in 2007 and 2008. It has been said that he has a winning personality especially not having to go through what many coaches undergo because transitioning from a pro-player to being a coach could be a little difficult.

He is lauded to bringing fortune to his team and is applauded for bringing a lighter side even when faced with a difficult condition even when they were 3 goals down in the Eastern Conference against the Montreal Canadiens he still joked about it to the media.

Many years down the line and Jon Cooper is at the epitome of his career as a full time coach. He is at the top of the pecking order and everybody’s eyes are on him. He has worked his way up and nobody could say it was only given to him. It is for the determination he has put in making it to the league. “I know where I came from and I’ll never forget that.”

Cooper is a great coach and deserves being where he is at.