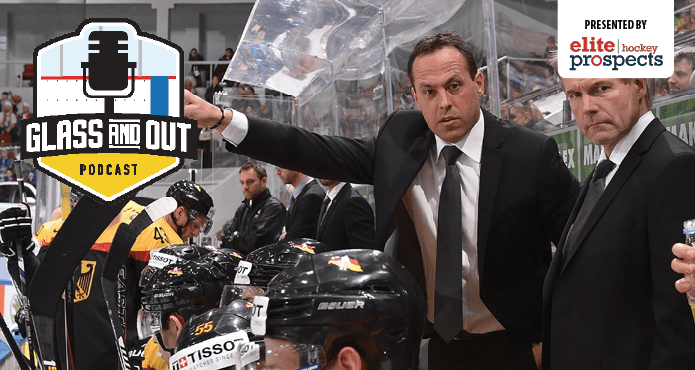 This week’s podcast is sponsored by Elite Prospects.

The recent growth of German hockey has been one of the more intriguing stories within the hockey world over the past few years.

A silver medal at the 2018 Winter Olympics, four first-round picks over the past three NHL drafts, and the reigning Art Ross, Ted Lindsay and Hart Trophy winner in Leon Draisaitl are just a few accomplishments the country has to boast over that span.

As arguably the most celebrated German player ever and former national team head coach, Marco Sturm has left an impact at almost every level of German hockey. The current LA Kings assistant coach played a key role in the developing the German Ice Hockey Federation’s “POWER PLAY 26” program, which aims to make Germany a consistent medal contender at the World Championships and Olympics by the year 2026.

Sturm’s 14-season NHL career saw him spend time with six different teams and finish in first place in games played (938) and points scored (487) for a German born player. He was also a fixture with the national program, including captaining Germany at the Vancouver 2010 Olympics.

He got his coaching career started with that same national team, leading the Germans at the World Championships, World Junior Championships and Deutschland Cups between 2015-2018. During that time, he helped Germany qualify for the 2018 Winter Olympics in South Korea. Then came the Cinderella run that resulted in the first silver medal in hockey in the country’s history.

That same season, Sturm joined Willie Desjardins’ staff in LA midway through the NHL season. He would remain with the club when Todd McLellan took over as head coach the following year. The Kings are currently in the midst of a rebuild with one of the most promising prospect pools in the league.

In this week’s podcast, sponsored by Elite Prospects, we’ll find out about his experience growing up playing hockey in Germany, how the “POWER PLAY 26” program has helped the growth of German hockey, and what he’s learned since making his coaching debut in the NHL.