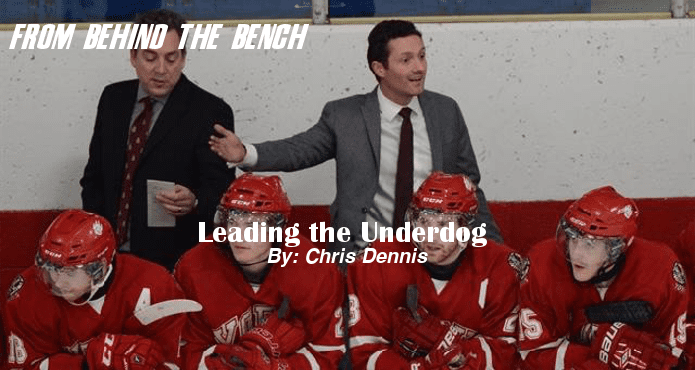 Chris Dennis spent 10 years making his way through various coaching and administration positions with the Toronto Maple Leafs. He worked under legends like Pat Quinn, Paul Maurice, Ron Wilson and Randy Carlyle, but when the Leafs cleaned house in 2015, Dennis returned to his alma mater, as head coach of the York University Lions. Prior to his arrival York finished in last place in the OUA mens hockey standings. Where others might have seen obstacles, Dennis saw opportunity, and he led the Lions from last place to first in regular season standings. Coming from one of the most lucrative franchises in the NHL, joining a program a program in the CIS with limited means presented some challenges. So how does a coach a coach go from the working with millionaire athletes to college students juggling academic and team commitments?. For Chris Dennis’ installment on From Behind the Bench, he takes us through what it’s like embrace change and gaining a new appreciation for the student athlete.

I’m not sure I really had any thoughts as to what it would be like, but it was a lot of fun. I’m in awe of the players. These are student athletes so they have a lot of other responsibilities; with NHL players it’s their job and they get paid to have their sole focus be on getting better as hockey players. My athletes have to go home and work in the summer. They work eight hour days and after that we ask them to go the gym and eat right and stay focused so they are ready to go in September. It takes an unbelievable amount of commitment to be able to play at a high level in our league.

It was an easy transition for me from the NHL to the CIS. I was very fortunate to bring together a coaching staff that worked very well together. Russ Harrington coached in the provincial junior league for a long time and knew the ins and outs of CIS hockey better than I did. Andreas Karlsson, who had moved to Toronto from Sweden came on board after playing 19 years of professional hockey and coaching in the Swedish Junior League. Jesse Messier, who was a former captain at York, was looking to start coaching and came in on a part-time basis. We all have very different personalities but are always respectful of one another’s opinions and have a lot of fun together.

We came up with a game plan on what we wanted our culture to be and how we wanted our team to behave.  On day one we started to implement it. We didn’t get one bit of pushback or one question about why we were doing what we were doing.  The group was on board right away and that’s a huge credit to them because it’s not always an easy thing to do.

We have what we need, the fundamentals are still there; everything you must have is available.  If there is something that is lacking, it’s manpower. If we need laundry done, a couple of the players are doing it. If the floor needs to be swept, I might do it, or a player or one of the training staff might do it. In the NHL, you’re so lucky to be there and to have all those wonderful opportunities. When you change levels the funds aren’t the same, but it’s still great.  You just find different ways to make it great.  Every experience is a chance to get to know people and a chance to see how people react and respond and to find out who’s willing to dig in. When I first got to York, myself, the captain and our starting goalie painted our own stick rack. For me, it was an opportunity to spend a couple of hours with those guys and get to know them and I loved it.

I couldn’t have gone into a more eager and dedicated group. That, and the way we won some games. We weren’t a skilled team that could blow other teams out. Most of the teams that finish higher up in the standings in our league are powerhouses that can pull off five and six goals a game. We’re not that team! We battled out our wins and the best wins were really fun and the guys felt really proud of themselves after. Waterloo was one—they started an eight game winning streak against us and then we ended it, but it was a terrific game again that could have gone either way. Another one was against Western late in the season. Again, it was a battle, so it really was how we won the games and the group we did it with.

There’s still a lot to learn. We were out in the first round of the playoffs, and that was a good learning experience for all of us—it was my first experience with a best two out of three series, and I know there are things I would do differently as far as managing our time throughout the playoffs. Next year, we are going to be looking for more playoff success and we are going to continue to get better.

Now that we’ve had some success, the tough part about next season is that there will be an expectation. It’s easier being the underdog. Teams are going to show up to play us every time and there’s not going to be a game where the opposing team takes the night off. When you’re the first place team, that’s the burden you have to carry. Everybody is ready to go when you come into their building or when they come into yours. There are different expectations going into next season but that’s what you want and I’m excited about them.

What made this season such a success is how the players believed in themselves—they always tried and always competed, and they never thought they were out of it. And when you’ve got a group that believes in itself, it can be a dangerous thing for other teams.

Before I got to York, I had heard the CIS is one of the most underrated hockey leagues in the world, but I wasn’t sure. Now that I’ve lived it for a year, I can say that it’s 100 per cent true. I have a tremendous amount of respect for the skill and dedication of not just my team, but everybody that plays in this league.